Mozilla released quite a few web browsers for Android in the past and is working on a new mobile browser for the operating system at the time of writing.

One question that might come to the mind of current Firefox users is how the upcoming release of the new Firefox browser for Android (named Firefox Preview currently) affects current browsers. 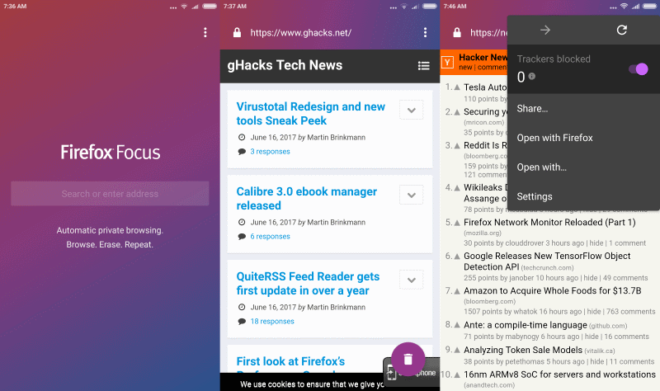 Besides Firefox for Android, which is the current default browser, there is also Firefox Focus for Android and Firefox Lite.

Firefox Focus for Android (called Firefox Klar in German speaking countries) is a mobile browser that is focused on improving privacy by blocking certain trackers and advertisement automatically, and gives users easy options to clear browsing data. Firefox Lite is a lightweight version of Firefox that has been released in some regions only.

When you visit the Firefox Focus for Android project page on GitHub, you find the following note attached to the top of the page:

Note: Development of this project is not currently a high priority, and thus we cannot guarantee timely reviews or interactions on this repository. If you would like to contribute to one of our other Android projects, we recommend checking out Android Components. We greatly appreciate your interest in and contributions towards Focus and look forward to working with you on other projects!

Firefox Focus was off to a bad start as the privacy-focused browser was set up to collect analytics data and to submit the data to a third-party company.

The upcoming version of Firefox for Android blocks certain content and scripts automatically as well thanks to the built-in Tracking Protection implementation. Mozilla enabled and improved Tracking Protection recently by default in desktop versions of the Firefox web browser.

All development resources focus on the new Firefox mobile browser currently at Mozilla. Firefox Fenix, the codename of the browser, includes many of the features that made Firefox Focus a privacy-focused browser.

If I had to make an educated guess, I’d say that Firefox Focus won’t receive much love anymore even after the release of Firefox Fenix as it could be replaced by the new browser and would do away with some of the confusion caused by Mozilla maintaining multiple browsers on Android.

Now You: What is your take on all of this?

Ghacks needs you. You can find out how to support us here (https://www.ghacks.net/support/) or support the site directly by becoming a Patreon (https://www.patreon.com/ghacks)). Thank you for being a Ghacks reader. The post Firefox Focus not a high priority currently appeared first on gHacks Technology News.

The new robot barista at the cafe in Daejeon, South Korea, is courteous and swift as it seamlessly makes its

Now, drones and planes to fight locust menace in Rajasthan