Mozilla released Firefox Preview 1.0 for Google’s Android operating system on Google Play after publishing an earlier version in May 2019. The organization put a lot of work in the redesigned version of the Firefox web browser and plans to replace the current stable version of Firefox with the new release eventually.

Firefox Preview 1.0 can be downloaded from Google Play. The release is marked as a preview which means that it should be seen as a beta release at this point.

Mozilla plans to push out a release for the current version of Firefox for Android that brings the version to Firefox 68. The mobile browser is moved to the ESR channel then so that it continues to receive security and bug fix updates for as long as it is necessary to get the new Firefox ready.

Mozilla aims to replace the current version of Firefox with the new at the end of 2019. The new version lacks some features that Mozilla wants it to support. The organization made it clear that it won’t release the new version until it supports all major features of the old version. One feature that is missing in the preview release is support for browser extensions. 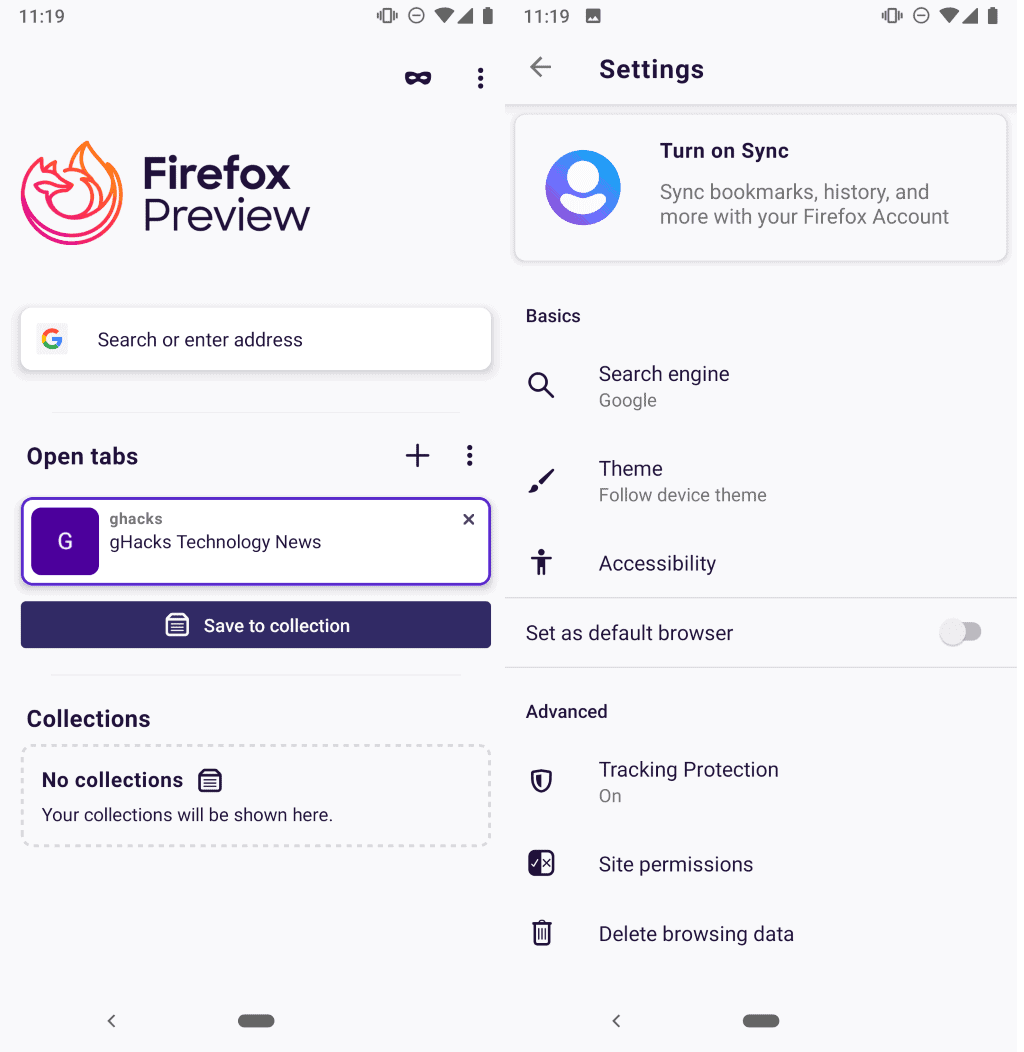 Android users may run both browsers side-by-side if they wish as there are not any limitations that prevent that. The browser requires Android 5.0 or higher while the current version of Firefox for Android earlier (4.x) versions as well). 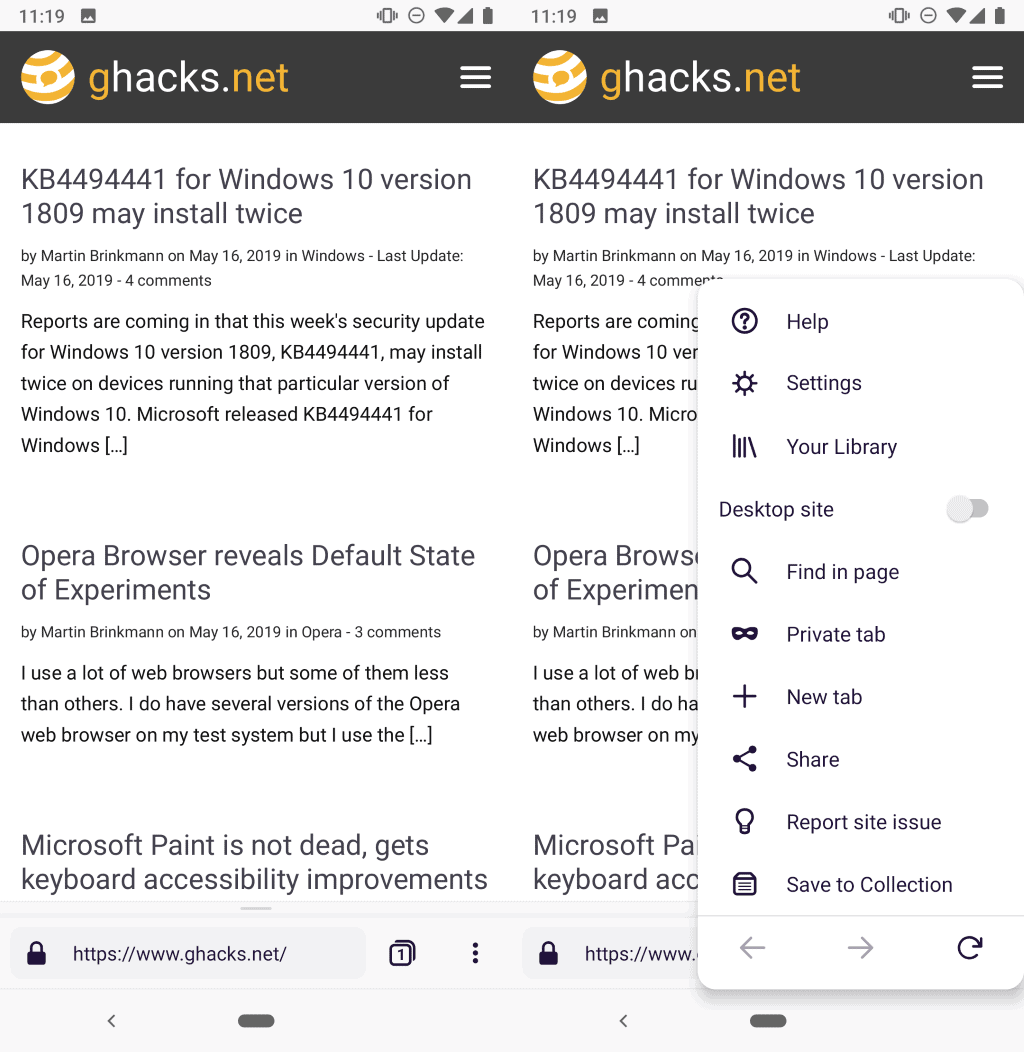 The start page displays open tabs, collections, information provided by Mozilla, and a search and address form. The address bar that the browser displays at the bottom of the screen is not displayed on the startpage or new tab page.

Firefox Preview uses Google as the default search engine, at least in my region and probably in most regions. A click on Menu > Settings > Search engine provides an option to change the search engine.

The browser includes Amazon, Bing, DuckDuckGo, Twitter, and Wikipedia as default search engines. I could not find an option to add other search engines to the browser.

Firefox switches the interface once you start to type in the field on the startpage. The address and search bar is moved to the top and suggestions are displayed underneath it. Options to scan a QR code to open an URL and to display all other search engines are provided here.

The address field is moved to the bottom of the screen when websites are loaded in the mobile browser. The main idea behind the position is that it is makes one-handed use easier. 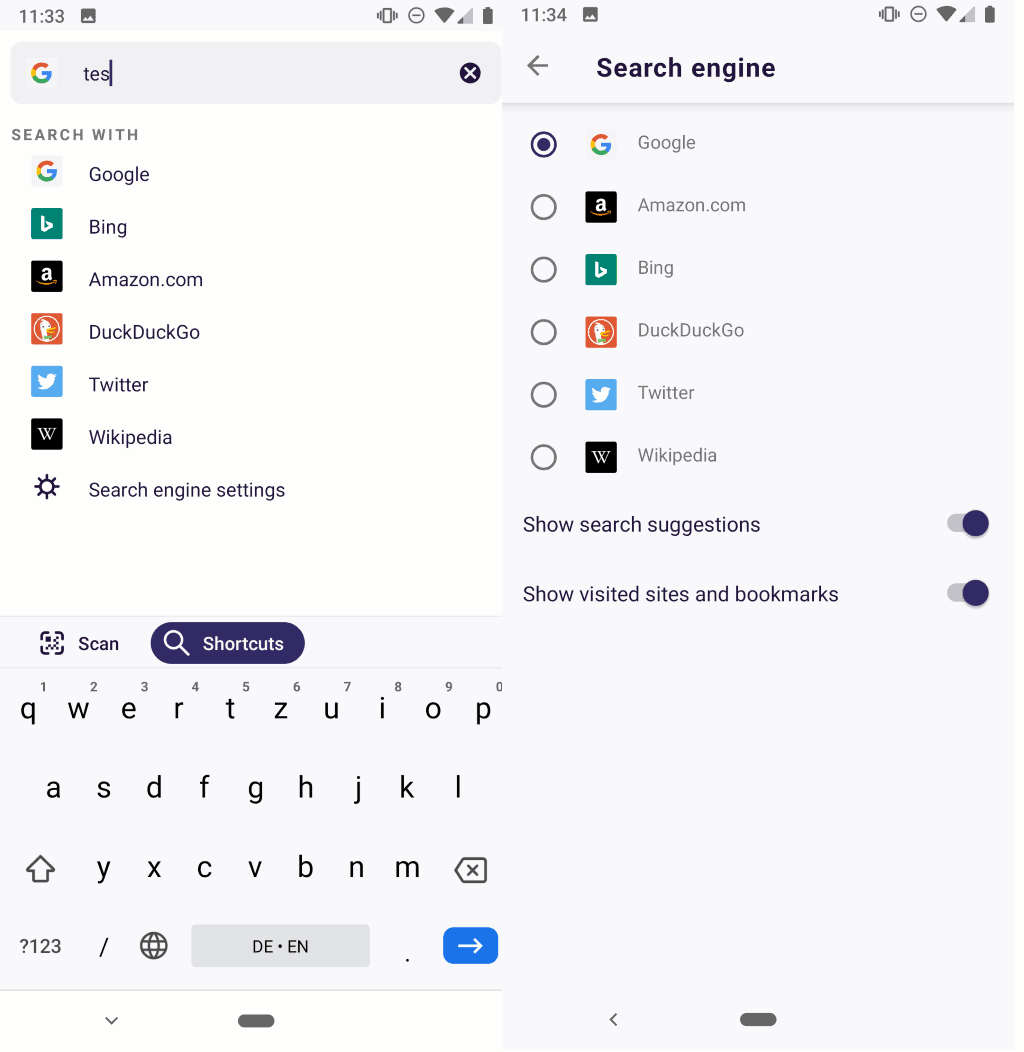 A tap on the lock icon next to the address displays connection security information and a toggle to enable or disable tracking protection on the active site. Firefox Preview displays the full address in the address bar; good.

A tap on the menu icon displays an option to open the desktop page of the active site (if available), the Settings, library, and to save the site to Firefox’s new Collection feature, 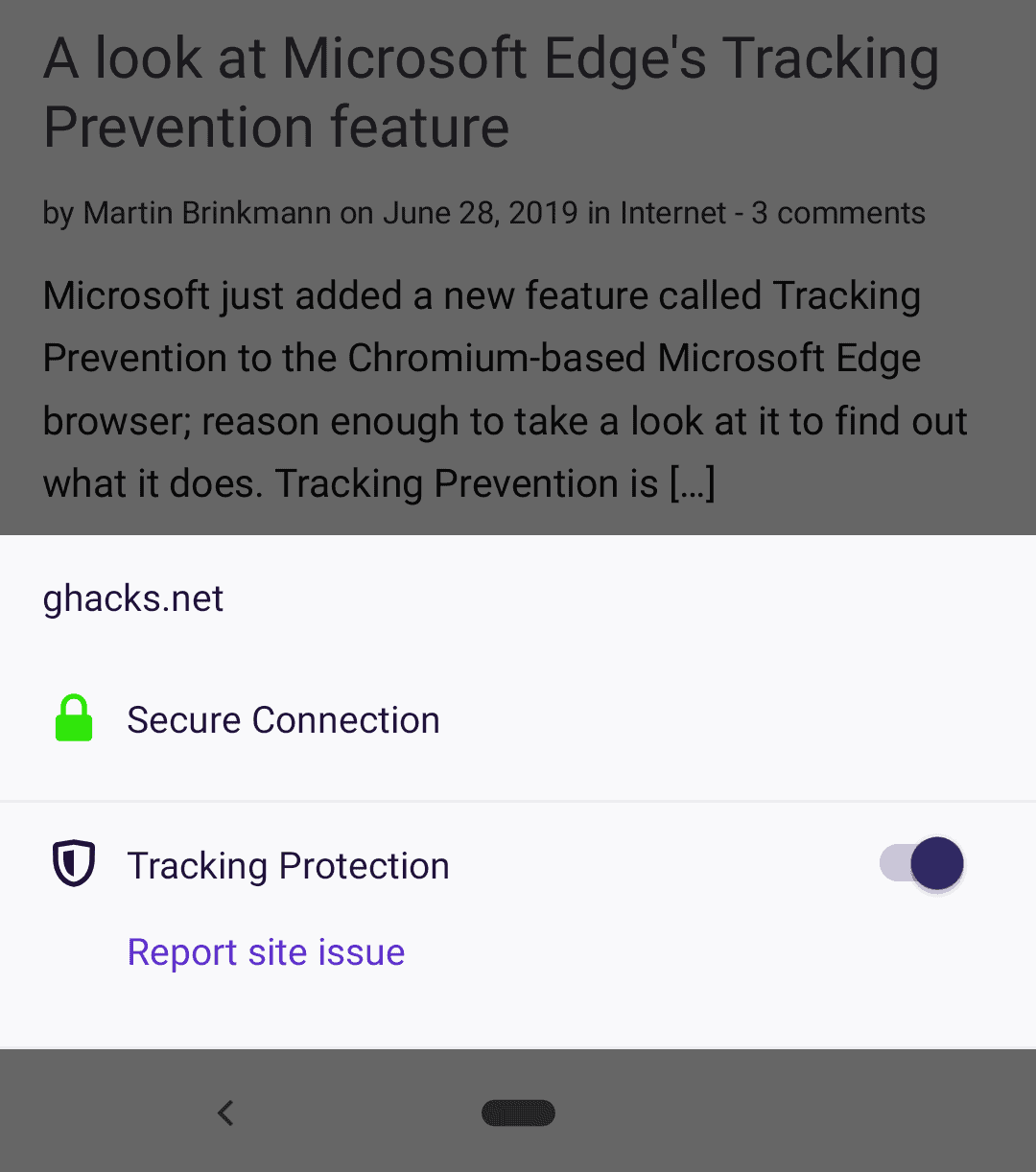 Firefox Preview comes with a handful of useful features and options. If you swipe up from the address bar area you will open a share, bookmark, and reader mode quick actions menu.

Collections look like folders to me that you can put sites into. Collections that you create are placed on the startpage of the browser. There you may open one or all sites of a collection comfortably.

The Settings display a limited number of preferences in the initial release. You can enable or disable Tracking Protection there and modify access permissions.

Tracking Protection is limited at the time as you cannot change lists or add other protective features that Mozilla introduced recently.

The biggest feature that is missing right now, when compared to the feature set of the current version of Firefox for Android, is lack of support for browser extensions.

It is not 100% certain that extensions support will be integrated in Firefox Preview for Android. Mozilla plans to release an ad-blocker for the browser however according to Sören Hentzschel.

Firefox Preview will be the next version of the Firefox browser. Users who run the current Firefox for Android may continue to do so for the foreseeable future. Support will be dropped eventually though.

Now You: Have you tried the new browser version? What is your take?

Ghacks needs you. You can find out how to support us here (https://www.ghacks.net/support/) or support the site directly by becoming a Patreon (https://www.patreon.com/ghacks)). Thank you for being a Ghacks reader. The post Firefox Preview 1.0 (Fenix) is now available appeared first on gHacks Technology News.

Get Text Suggestions as you type globally when using Windows 10

US government's lawsuit against Google: What it means and more