Google Chrome may soon get a Play Control button in the Chrome taskbar when a video or other media is playing in the browser.

May, because the feature is tested currently. While plenty of tests made it into final versions of Chrome, there is an even larger number of tests that never made it.

The feature landed in Chrome Canary recently; Chrome users may enable it and start using it. Since it is an experimental flag, bugs are to be expected, and this one is quite buggy at the time of writing.

First, the basics. You need to run the latest Chrome Canary release if you want to test it right now. It is now enabled by default so that you won’t see the Play icon if you play a video on YouTube or elsewhere.

What you need to do is load chrome://flags/#global-media-controls in the Chrome address bar and set the flag Global Media Controls to enabled. Its description reads “Enables the Global Media Controls UI in the toolbar” and it is available for Mac, Windows, and Linux only. A restart of the browser completes the process. 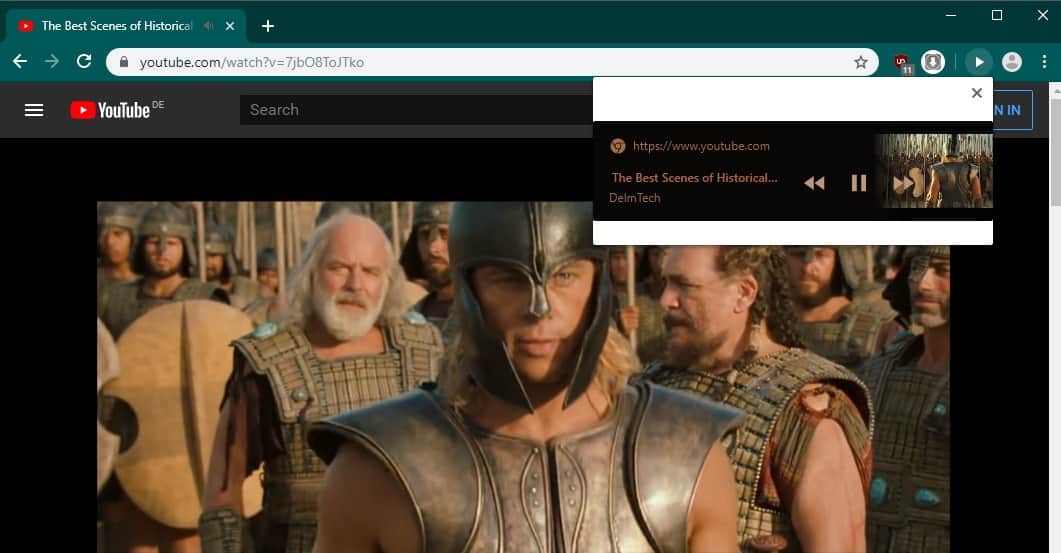 A visit to YouTube and the playing of a video on the site shows the Play Control button in the Chrome main interface. That’s also the time were you will run into bugs; Chrome may crash after a short while and there is nothing that you can do about it.

When you activate the Play Control with a click or tap, you will see a thumbnail of the video, the URL it is played on, and the title of it. Controls to pause or play the video, and to go back and forward in the video are provided as well.

The control is displayed on any tab that is open in the browser, even in different browser windows. Means: you can control the playback of media right from there without having to switch to the video tab first.

The feature is useful for users who like to play videos or audio files in the background while they do something else in the browser. Volume controls are missing, e.g. muting or changing of volume, but the feature is not finalized yet from the look and feel, and the crash issue that it is causing.

Play Controls in the Chrome main toolbar are not useful to all users but users who play media in the background and use other tabs in the meantime may appreciate the feature the most.

It is an experimental feature for now and it is not certain that it will land in stable Chrome. Google is pushing Chrome’s multimedia support in recent versions of the browser. The company launched multimedia keyboard support in Chrome earlier this year to support media keys on keyboards. The feature interferes with certain media clients, however.

Windows users may want to check out Taskplay, a free software to control media from the taskbar.

Now You: How useful are play controls in a browser’s main toolbar?

Ghacks needs you. You can find out how to support us here (https://www.ghacks.net/support/) or support the site directly by becoming a Patreon (https://www.patreon.com/ghacks)). Thank you for being a Ghacks reader. The post Google is testing new Play Control button in Chrome Taskbar appeared first on gHacks Technology News.

Samsung may give $500 million boost to make-in-India