It is unclear if previous versions of Windows, Windows 8.1 will be the last version left standing after the end of support of Windows 7 in January 2020, will receive the same treatment. 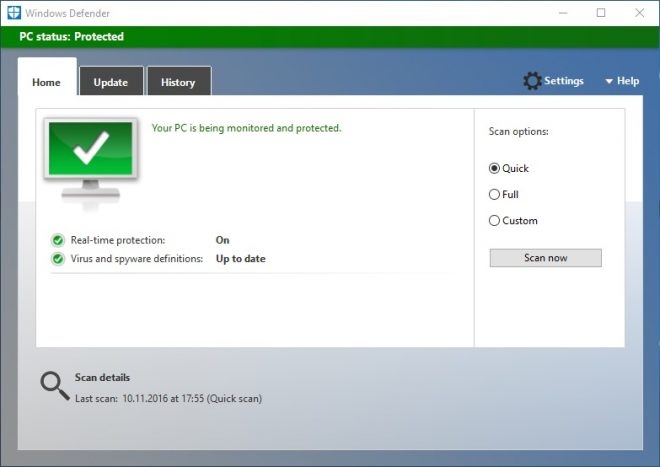 If you check the Group Policy entries for the security tool or the Settings application, you will notice the change right away.

If you run that preview build, you may also notice that some tools or features have not been renamed. Windows Defender Smartscreen is still called that, and so is Windows Defender Applications Guard. Whether that is going to remain or changed in upcoming preview builds remains to be seen.

One question has not been answered yet: why is Microsoft making the change? A likely explanation, and our colleagues over at Deskmodder seem to agree, is that Microsoft wants to use the Microsoft name for services and tools that are available on multiple platforms, and the Windows name if a service or tool is only available on Windows.

It is quite possible that Microsoft wants to bring Microsoft Defender or services related to the security tool to other platforms, and that it made the name change because of that.

Microsoft launched Windows Defender ATP back in 2017 for various platforms including Linux, Mac OS X, iOS and Android, and has renamed the service in the meantime to Microsoft Defender ATP (Advanced Threat Protection).

Now You: Too many name changes or changes that make sense, what is your take?

Ghacks needs you. You can find out how to support us here (https://www.ghacks.net/support/) or support the site directly by becoming a Patreon (https://www.patreon.com/ghacks)). Thank you for being a Ghacks reader. The post Say Goodbye to Windows Defender (getting renamed) appeared first on gHacks Technology News.