The company released the monthly security updates for Windows and other company products on August 13, 2019. Then, two days later, Microsoft acknowledged that the updates released for client and server versions of Windows were causing issues with Visual Basic applications and scripts. 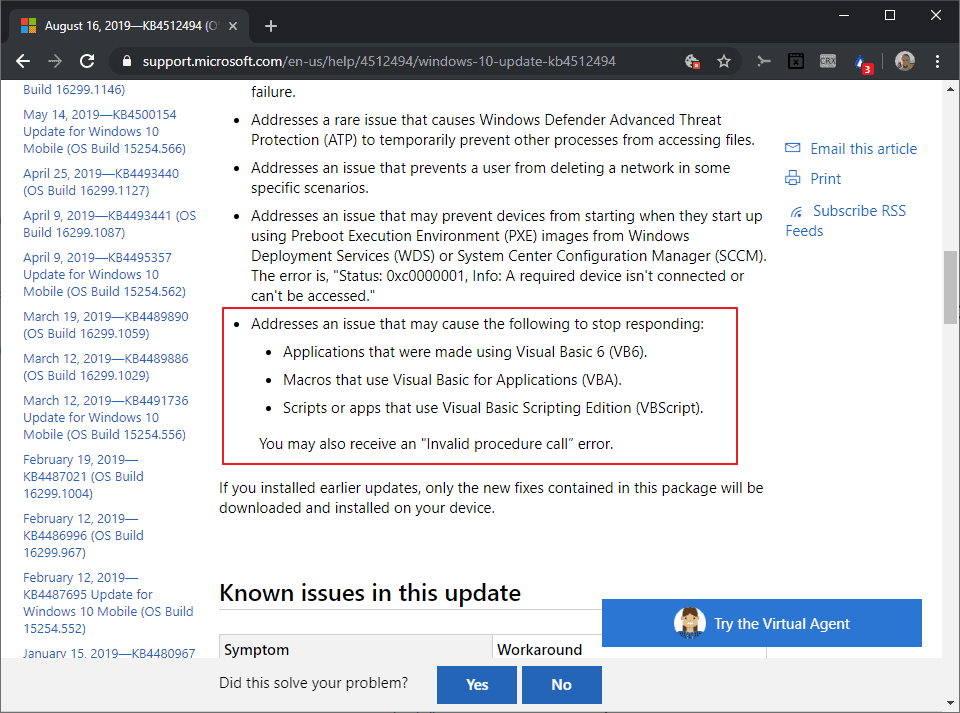 Microsoft released the following cumulative updates on August 16, 2019 that address the Visual Basic issues in those operating systems:

Addresses an issue in which the following may stop responding and you may receive the error, “Invalid procedure call”:

Here are the links to the Microsoft Update Catalog website from where the updates may be downloaded manually:

Tip: you can check the August listing on the Microsoft Update Catalog to monitor update releases. There you find the links to the updates for Windows Server 2008 and 2012.

It is unclear why updates for other supported Windows 10 versions were not released as well. The update for Windows 10 version 1709 addresses other issues. It fixes the long-standing Preboot Execution Environment startup issue among other things. (thank you EP)

If you are affected by VB issues you may want to consider upgrading the system to the new version right away to fix the issue. Everyone else may be better off skipping the update for now; it will be included in coming patches automatically.

Ghacks needs you. You can find out how to support us here (https://www.ghacks.net/support/) or support the site directly by becoming a Patreon (https://www.patreon.com/ghacks/). Thank you for being a Ghacks reader. The post First updates released that fix the Windows VB bugs appeared first on gHacks Technology News.