The plain text editor Notepad has been turned into a Microsoft Store application in the latest preview builds of the next major feature update for Windows 10, version 20H1.

Notepad is certainly not the first core Windows program that Microsoft turned into a Store application and it certainly won’t be the last. Microsoft announced in 2017 that it would move Microsoft Paint to the store but that has not happened yet. Paint will be turned into an optional feature though in Windows 10 20H1.

Notepad remains installed on Windows 10 devices going forward and most users may not even notice that something has changed.

Moving Notepad to the Store offers certain advantages; most notably, the option to update the Notepad application directly. Microsoft has to include Notepad updates in Windows Updates currently. The move to the Microsoft Store changes that as updates can be pushed without relying on Windows Update.

Microsoft updated Notepad several times in Windows 10. The company added extended line endings support in 2018, and a number of new features such as text zooming or find & replace improvements later that year.

Microsoft states in the announcement that the migration allows the company to respond quicker and with more flexibility to issues and feedback. 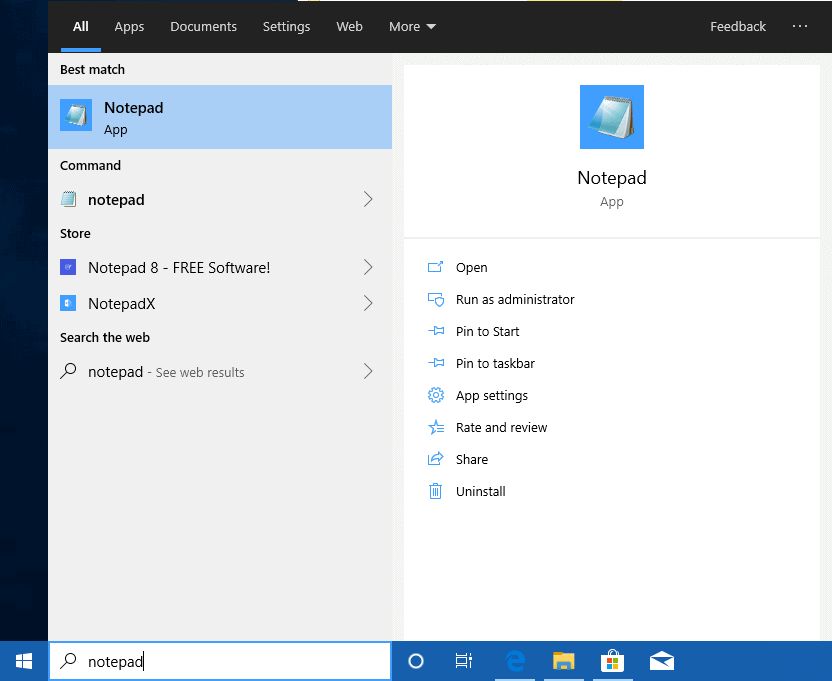 Windows users may notice changes as well. If you search for the Notepad application on a device running Windows 10 version 20H1 or right-click on Notepad’s entry in the Start Menu, you will notice that new options such as uninstallation or rate & review are available in that version.

Notepad is listed on the Microsoft Store already. Note that you do need Windows 10 version 20H1 to install the application on your devices.

Are there any downsides? The Store version is still in development and it is too early to come to a conclusion. Windows users who block Store updates or the Microsoft Store won’t receive updates until they upgrade Windows to a new version.

Users who don’t use Notepad can uninstall the application but it won’t free up lots of hard disk space. Check out our replacing Notepad with Notepad++ guide on how to replace Notepad with a capable text editor.

Now You: What is your take on Notepad being turned into a Microsoft Store application?

Ghacks needs you. You can find out how to support us here (https://www.ghacks.net/support/) or support the site directly by becoming a Patreon (https://www.patreon.com/ghacks/). Thank you for being a Ghacks reader. The post Microsoft moves Notepad to the Microsoft Store appeared first on gHacks Technology News.

RailTel, a Railway PSU had floated the tender last month for AI-based surveillance cameras that measure body temperatures of individuals

Free pizza and a 75-foot statue of Musk: The battle for the next Tesla plant

Apple says full return to offices not until the end of the year: Report