It took Microsoft just one day to acknowledge an issue related to the Start Menu and Windows Desktop Search in Windows 10 version 1903 caused by the recently released cumulative update KB4515384.

Update: Microsoft published a support article that suggests solutions to resolve the issue. Here is the list of suggestions:

Tip: you can check out all known issues of Windows 10 version 1903 here.

The previous bug caused high CPU usage on some systems the update was installed on. The process SearchUI.exe was responsible and users could verify that by opening the Task Manager on the device.

Uninstallation of the update resolved the issue and some admins found that certain workarounds such as enable web search helped as well. 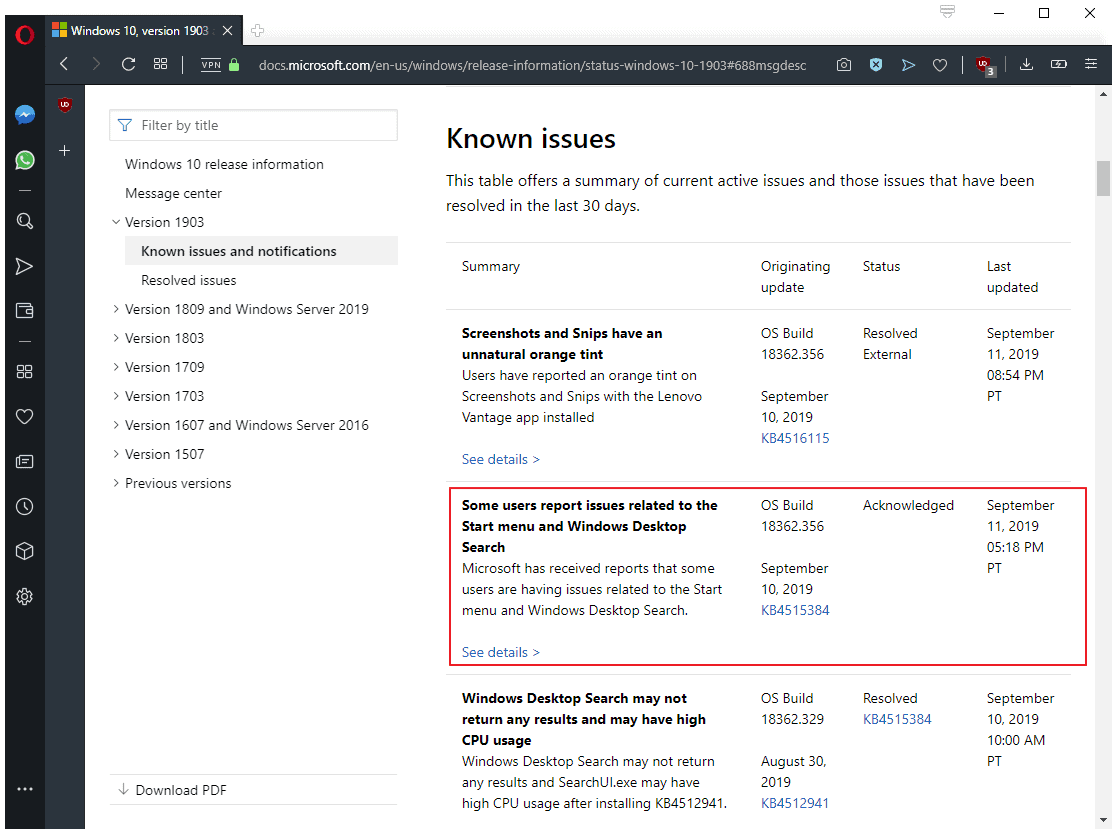 The cumulative update KB4515384 that Microsoft released on September 10, 2019 fixed the high CPU usage.  Some users who installed the update right away on PC systems reported that they ran into another search related issue after installation of the update; Start Menu searches would turn up blank and the loading icon would display indefinitely.

Microsoft acknowledged the bug on September 11, 2019, a day after release, on the official Windows 10 version 1903 known issues and notifications page.

Microsoft has received reports that some users are having issues related to the Start menu and Windows Desktop Search.

The company notes that it is investigating the issue currently. The issue has not been added to the know issues section of the released KB4515384 update yet; this may happen after confirmation of the bug by Microsoft

Microsoft reacted quickly to reports of the new issue as it published the acknowledgement just a day after release of the update. It took Microsoft four days to confirm the previous search related issue. It is unclear at this point if the second bug is related to the first search bug or if it is unrelated.

Now You: Did you run into bugs recently after installing Windows Updates?

Ghacks needs you. You can find out how to support us here (https://www.ghacks.net/support/) or support the site directly by becoming a Patreon (https://www.patreon.com/ghacks/). Thank you for being a Ghacks reader. The post Microsoft confirms second search bug in a row in Windows 10 1903 appeared first on gHacks Technology News.