The developer of the Windows Update Manager wumgr has released version 1.0 of the application for Microsoft’s Windows operating system. The release is the first program update in 2019 and an indication that development of the software program is still ongoing.

We reviewed the Update Manager for Windows wumgr back in October 2018 and concluded that it was a useful program that system administrators could utilize to regain control over the updating process on Windows PCs.

It is but one of the many programs created for that. Other programs that we reviewed in the past include Windows Automatic Updates Manager, Windows Update Mini Tool Wrapper Script, or Sledgehammer.

The general feel and functionality of the application has not changed in the new release. The program requires elevation to run and may still be started without installation. It uses the Windows Update Agent API for update management functionality and loads the update history on start. 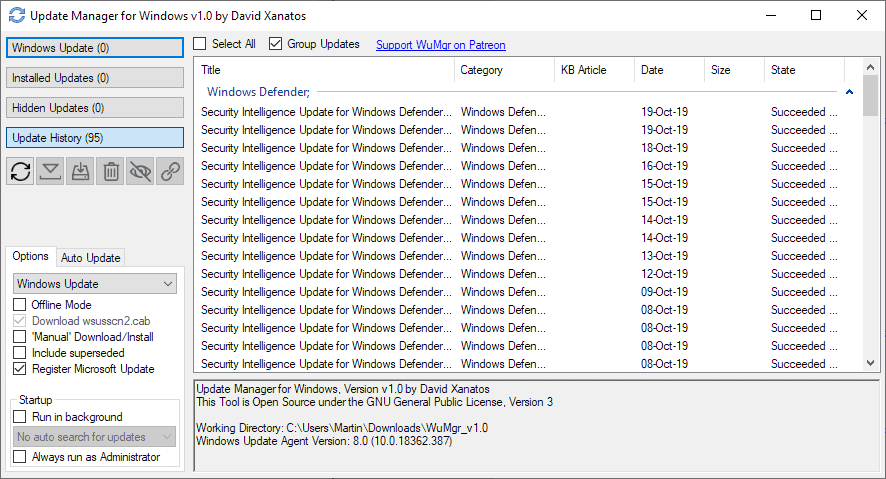 The interface itself is divided into two main parts: a sidebar that lists various options and filters, and the main panel that lists updates based on the selection.

The first thing that new users need to do is click on the search button to run a scan for available updates. The program displays all available updates in the main window. Each update is listed in a specific category, e.g  Windows Defender or Drivers, and information such as its name, Knowledgebase ID, release date, or size are displayed.

You may select one or multiple updates and process these by clicking on the buttons in the sidebar. Options include to download or install the selected updates, or to hide them so that they are not offered in the future again. Other options include getting direct links or removing installed updates from the system.

The options listing in the sidebar display a handful of interesting preferences. There it is possible to change the update source — the default is Windows Update — and change the program in other meaningful ways, e.g. to include superseded updates in the scan or enable offline mode.

One of the first thing that administrators may want to do is disable automatic updates on the machine; this can be done under the Auto Update tab.

The new version does not add many remarkable features to the app. The program is now available in Brazilian Portuguese and Italian, and it is now possible to select the interface language using an .ini option.

The automatic update check has been improved, and the date format should now display properly in all regions.

The update may not introduce any major features to the updates manager but it is a signal that development is ongoing. Users of the program may want to consider upgrading to the new version as it includes a number of fixes for core program functionality.

Now You: do you use a third-party updates manager? (via Deskmodder)

Thank you for being a Ghacks reader. The post Windows Update Manager wumgr 1.0 released appeared first on gHacks Technology News.

Necessity May Give Us a Virtual Court System