Microsoft revealed plans to integrate native support for DNS over HTTPS in the company’s Windows 10 operating system in November 2019.

The announcement was made on Microsoft’s Networking blog on November 17, 2019. DNS over HTTPS is designed to improve privacy, security and the reliability by encrypting DNS queries that are handled in plaintext currently.

DNS over HTTPS has been on the rise lately. Mozilla, Google, Opera as as well as several public DNS providers announced support for the standard. Support in programs, e.g. a web browser, means that the DNS queries that originate from that program are encrypted. Other queries, e.g. from another browser that does not support DNS over HTTPS or is configured not to use it, won’t benefit from that integration however.

Microsoft’s announcement brings DNS over HTTPS support to the Windows operating system. The company plans to introduce it to preview builds of Windows 10 in the future before it releases it in a final version of the operating system. 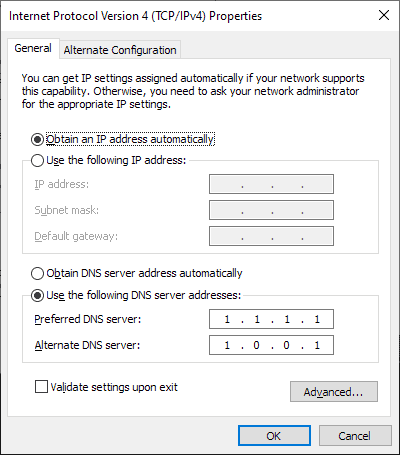 Microsoft plans to follow Google’s implementation, at least initially. Google revealed some time ago that it will roll out DNS over HTTPS in Chrome, but only on systems that use a DNS service that supports DNS over HTTPS. In other words: Google won’t alter the DNS provider of the system. Mozilla and Opera decided to pick a provider, at least initially, and that means that the local DNS provider may be overridden in the browser.

Microsoft notes that it won’t be making changes to the DNS server configuration of the Windows machine. Administrators (and users) are in control when it comes to the selection of the DNS provider on Windows and the introduction of support for DNS over HTTPS on Windows won’t change that.

The change may benefit users without them knowing about it. If a system is configured to use a DNS provider that supports DNS over HTTPS, that system will automatically use the new standard so that DNS data is encrypted.

The company plans to introduce “more privacy-friendly ways” for its customers to discover DNS settings in Windows and raise awareness for DNS over HTTPS in the operating system.

Microsoft did not reveal a schedule for the integration but it is clear that it will land in a future Insider build for Windows 10 first. Integration in Windows — and other client operating systems — makes more sense than integrating the functionality into individual programs. Users who want to use DNS over HTTPS may simply pick a DNS provider that supports it to enable the feature for all applications that run on the system.

Now You: What is your take on Microsoft’s announcement? (via Winaero)

Thank you for being a Ghacks reader. The post Microsoft will integrate DNS over HTTPS in Windows 10 appeared first on gHacks Technology News.

Amazon has partnered with HDFC Bank to offer an instant discount of up to Rs 1,500 on both EMI and

Apple to re-close more stores in seven US states, bringing total to 77