Firefox Voice is a new experiment by Mozilla that has just been launched as a beta. The experiment brings voice controls to the Firefox web browser and is currently only available for desktop versions of Firefox.

The extension requires a truckload of permissions but that is understandable considering that you control different parts of the browser using it. You are asked if you want to allow Firefox Voice to collect voice transcripts and make them available to Mozilla for research purposes; you can allow or deny the request.

Note that Firefox Voice makes use of the Google Cloud Speech Service; any voice command is send to Google’s service. Mozilla notes that Google does not record these commands.

Firefox Voice is not the first attempt to bring voice controls to Firefox. Mozilla launched an experiment called Voice Fill back in 2017 to “speak to” search engines. 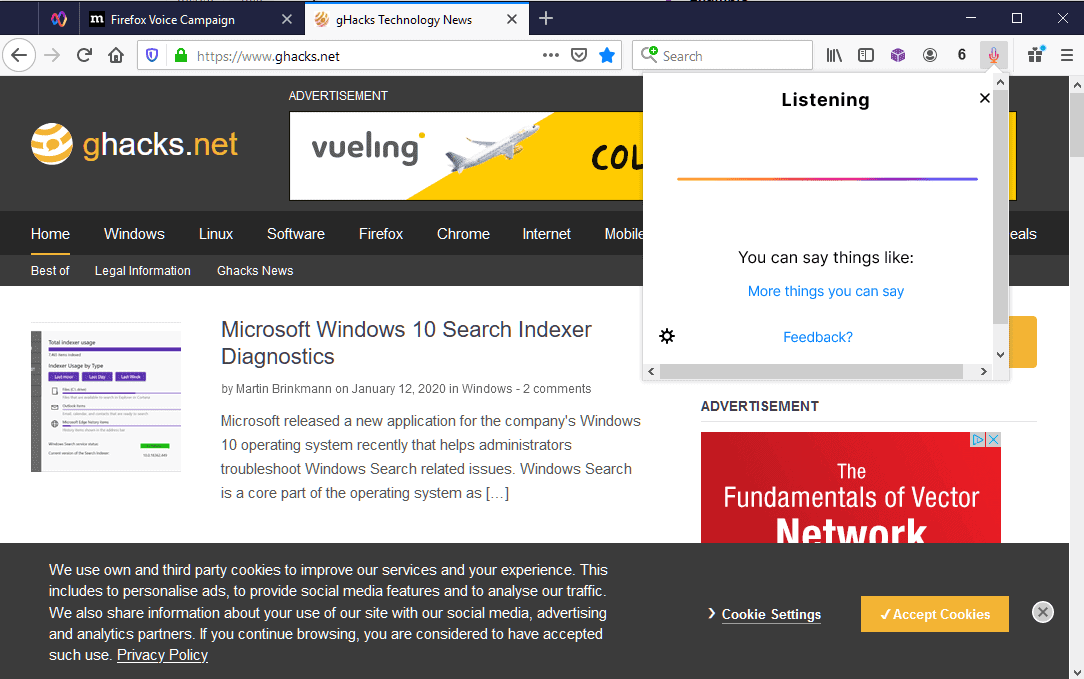 As far as options are concerned, there is a lot that you can use Firefox Voice already for even in this early stage of development:

As you can see, Firefox Voice supports quite a good range of voice commands already. It is likely that the service will see even more commands in the future as development is still ongoing.

Firefox Voice is limited to controls in the English language currently. To use it, activate the Firefox Voice icon in the address bar and speak to control the browser using your voice.

Voice worked surprisingly well during an initial test. How well it works depends on a number of factors, including the microphone that is used, the command that is issued, and your pronunciation.

Additional information is available on the project’s GitHub webpage.

Firefox Voice is an interesting feature that works really well already. While I have little use for it, I can see its use for others. Obviously, having to click a button to run voice commands is not the most effective way of controlling the browser but since most users would not probably want that the service listens to everything, it is necessary to limit voice interaction.

Now You: Would you use Firefox Voice? (via Sören Hentzschel)

Thank you for being a Ghacks reader. The post Firefox Voice Beta starts appeared first on gHacks Technology News.

PrivacyBreacher is an open source Android application that has been created to showcase some privacy issues on Android devices. It