MZLA Technologies Corporation has released Thunderbird 68.5.0; this is the first release of Thunderbird under the newly founded parent company that is a wholly owned subsidiary of Mozilla Foundation.

Thunderbird 68.5.0 is already available via the email client’s built-in updating system but also as a direct download on the project’s official website Thunderbird.net.

Thunderbird users may select Help > About Thunderbird to run a check for updates from within the client. The new version should be picked up, downloaded and installed automatically at that point. A restart is required to complete the process. 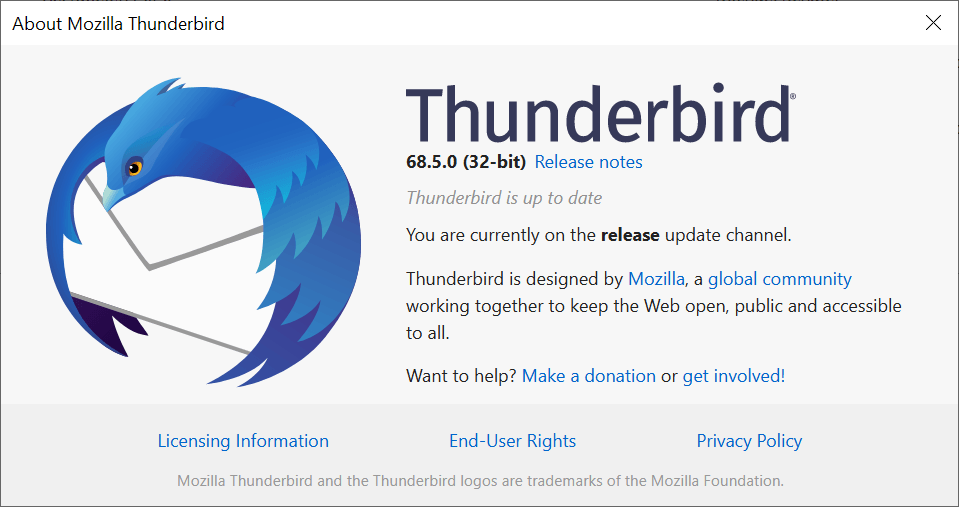 Thunderbird 60.x installations are not automatically upgraded to the new version unless the calendar add-on Lightning is installed.

The long-standing issue when upgrading from Thunderbird 60.x to 68.x has not been fixed yet. Installed extensions are not updated automatically during the upgrade process; this may be necessary for compatibility purposes and some add-ons may be disabled as a consequence. The integrated update check for add-ons will check for new versions of installed extensions after the upgrade however.

The new version of the email client comes with two new features:

Both extend compatibility and are welcome additions to the email program’s list of supported features.

Now You: Do you use Thunderbird? What’s your take on recent versions and developments?

Thank you for being a Ghacks reader. The post Thunderbird 68.5.0 out with new features and security updates appeared first on gHacks Technology News.

With the removal of the proprietary headphone jack, Apple also eliminated the workaround that allows users to split the audio

Amazon Freedom sale: 10 smartwatches from Apple, Samsung and others that are available at a discount of up to Rs 12,000

New smartphones from Samsung, Google and Xiaomi and other top tech news of the week