NV Updater is a free software program for Microsoft Windows devices that assists administrators when it comes to the installation of Nvidia graphics drivers.

Nvidia graphics driver install the driver for the video card but also additional components. Some of them may be useful, others, e.g. Telemetry, not so much for the user. It is our recommendation to only install the components that you require, e.g. only the Nvidia driver, and to uninstall previous versions and components before installing new versions.

We have reviewed quite a few third-party programs in the past that help users in that regard. NVSlimmer removes unwanted components from Nvidia drivers,  NVCleanstall allows you to customize the driver installation, and TinyNvidiaUpdateChecker informs you when new drivers become available.#

NV Updater falls into that category as it checks for updates regularly and includes options to remove some components from the driver installation. It is a third-party tool that was released back in October 2019 for the first time. Several versions have been released since, the latest just yesterday. 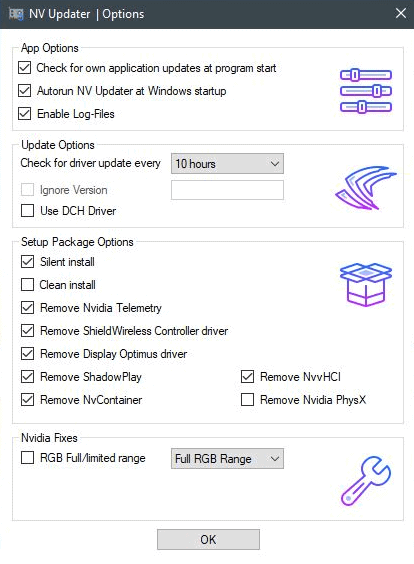 Note: You may get SmartScreen prompts when you try to download the file or run it on a Windows computer.

The program needs to be installed and you can only run it if a Nvidia video card is used on the device; otherwise, it will exit.

NV Updater displays the available options on start. These are divided into App, Update and Setup Package Options, as well as Nvidia fixes.

The application checks for Nvidia graphics driver updates in regular intervals when it runs in the background. You can set that interval, e.g. every 10 hours, during configuration. There you may also configure it to look for DCH drivers.

Nvidia users need to install the GeForce Experience application if they want to make use of update checks otherwise, and use of the software requires an account.

The setup package options lists components that you may remove from the installation process and options to do a clean and/or silent install.

The components that you may remove are:

You can select any combination and the selected components won’t be installed.

The remaining options let you disable its own update checks, autostart with Windows, and the creation of log files.

NV Updater is considered Beta by the author. It worked fine during tests however but if you don’t want to run beta software on your systems you need to wait for the first stable release before you give it a try.

Now You: Do you update drivers regularly? (via Deskmodder)

Thank you for being a Ghacks reader. The post NV Updater is a tool to customize Nvidia driver installations appeared first on gHacks Technology News.

In the ongoing fight against COVID-19 pandemic, the Defence Research and Development Organisation (DRDO) has installed its newly developed full

How to restore the old Firefox address bar