Microsoft’s new Chromium-based Edge browser offers several advantages over the classic Edge browser. Since it is based on the same core as Google Chrome, one of these advantages is the ability to head over to the Chrome Web Store to install pretty much any extension offered there.

The feature is not unique to the new Microsoft Edge browser as other Chromium-based web browsers, Opera and Vivaldi being two, support the same functionality.

The Chrome Web Store hosts thousands of browser extension which is massive compared to Microsoft’s own extensions store for the new Edge browser which sits at around 100 extensions at the time of writing.

While it is a good idea to check Microsoft’s own store first before you pay a visit to the Chrome Web Store, there is nothing wrong with downloading and installing extensions from that store. 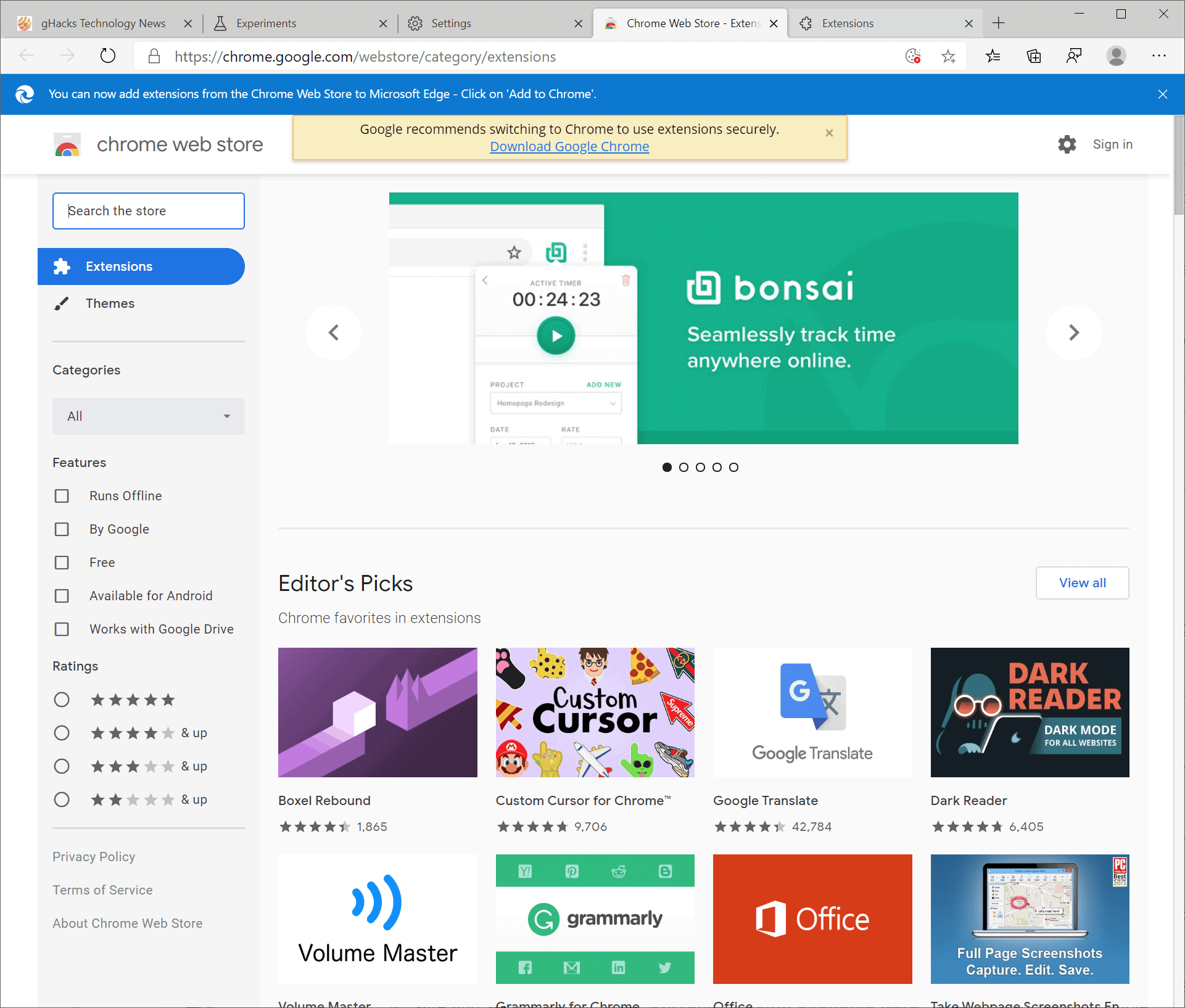 Google is probably not that happy about that option. If you visit the Chrome Web Store using the new Chromium-based Edge browser, you get a notification at the top by Google that more or less states that extensions may only be used securely if Chrome is used.

Google recommends switching to Chrome to use extensions securely.

A download link is placed prominently as well. A click on the x-icon closes the notification for the active page but it is displayed again when you reload or load a different page on the site.

Google does not provide an explanation for the claim that it makes and it is targeting only the new Microsoft Edge browser and not other Chromium-based browsers that supported the installation of extensions from the Chrome Web Store for years.

Google and Microsoft have been trying various strategies to get users to use their browsers. Microsoft displays a notification in the Windows 10 Start Menu recently to some Firefox users suggesting they should try the new Edge browser. Google is known for limiting access to certain features to Chrome initially.  Both companies use their widely popular services and applications to push their browsers.

If there is indeed a security issue involved when running Chrome extensions in other Chromium-based browsers, it would be appreciated by many if Google would provide details on the issue at hand. For now, it seems more like an attempt to scare Edge users into switching to Chrome.

Now You: What is your take on this?

Thank you for being a Ghacks reader. The post Google tries to persuade Edge users to use Chrome appeared first on gHacks Technology News.

Microsoft Corporation has agreed to buy the domain corp.com from a private owner for an undisclosed sum, in an effort