Having a bunch of programs opened at the same time can affect your productivity, especially if you’re constantly alt + tabbing between some of those. The taskbar does a better job, but having to locate each program’s icon and switch to may not be easier all the time. 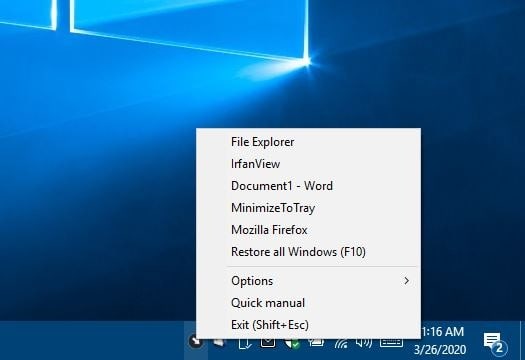 Want to minimize some programs to the system tray instead? That’s what MinimizeToTray does. Don’t confuse this program with the popular Thunderbird extension of the same name, and though you can use it for the same purpose, you’re better off with ThunderBirdTray.

MinimizeToTray is a Windows program. The program is open source and portable. Extract the archive, run the EXE and it opens as a tray application. Switch to the window that you want to minimize to the tray, and use the hotkey Alt + F1; this will hide the current window from view.

This method also works with the Windows Task Bar, though I wouldn’t really recommend using this. You can minimize several applications to the tray,  but you’ll need to use the hotkey for each program’s window. Once the applications are minimized to the tray, they are inaccessible via Alt + Tab. Don’t worry they are still running in the background.

While testing it with various windows, I noticed that it wouldn’t minimize Windows’ Task Manager to the tray. The quick manual option in the program’s tray menu explains why. Programs that were opened with elevated privileges cannot be hidden through normal means using MinimizeToTray. You’ll need to run the application with administrator rights to force other admin-elevated programs to minimize to the tray. Since Task Manager is a system application, it’s running with administrator privileges. Opening MinimizeToTray as an administrator allowed sending the program to the tray. 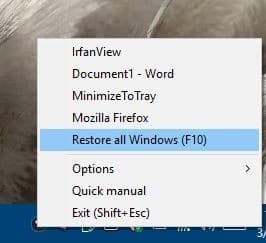 To restore a minimized window, use the key combo Alt + F2. There is another way to restore minimized windows, and that’s by using the MinimizeToTray icon. Right-click on it to view the list of hidden windows. Mouse over the program that you want to restore, and left-click on it. If you have hidden more than one window, you can use the F10 key to restore them all at once. Or use the tray icon’s “Restore all Windows” option.

The program’s system tray icon has an Options menu that lists two settings. The first option is used to force “Alt + F4” exit the window’s process, the program’s default exit shortcut is Shift + Escape. The other option, when enabled, will restore all hidden windows when you close MiniMizeToTray.

The program does not save its settings, i.e. there is no INI file. While that can be a good thing, what this also implies is that unfortunately there is no option to customize the keyboard shortcuts.

MinimizeToTray is a script written using AutoIT. If you read our review of Batch Image Cropper, you’re probably aware that antivirus programs tend to flag AutoIT scripts as malware. These are usually false positives, and that seems to be the same case with the tray application. VirusTotal reports 6 detections and 3 of those are low confidence (low number of users) ratings. Major antivirus vendors have given it a clean chit. Head to the GitHub page and click on “MinimizeToTray.au3” to view the source code of the script.

The program works well but the keyboard shortcuts could’ve been better, they aren’t exactly easy to reach while typing.

Thank you for being a Ghacks reader. The post Minimize any program to the system tray with MinimizeToTray appeared first on gHacks Technology News.