Containers is an interesting feature that Mozilla implemented in the Firefox web browser some time ago. It provides users with a way to separate sites from each other, and benefits of doing so are clear: less tracking, improved privacy, and the ability to sign-in to multiple accounts in a single browsing session.

The Mutli-Account Containers add-on adds configuration options to the feature. You use it to create and edit containers, and to assign sites to containers. The extension ships with the four default containers personal, work, banking and shopping, and users may add more containers, rename existing ones, or customize them with different colors or icons.

Up until now, it was possible to assign certain sites to specific containers. An assigned site would always be opened in that particular container in Firefox to separate it from others.

The new major Firefox Multi-Account Containers release that just landed on Mozilla AMO introduces another feature: site isolation. Besides assigning sites to containers, it is now possible to limit containers to particular sites. 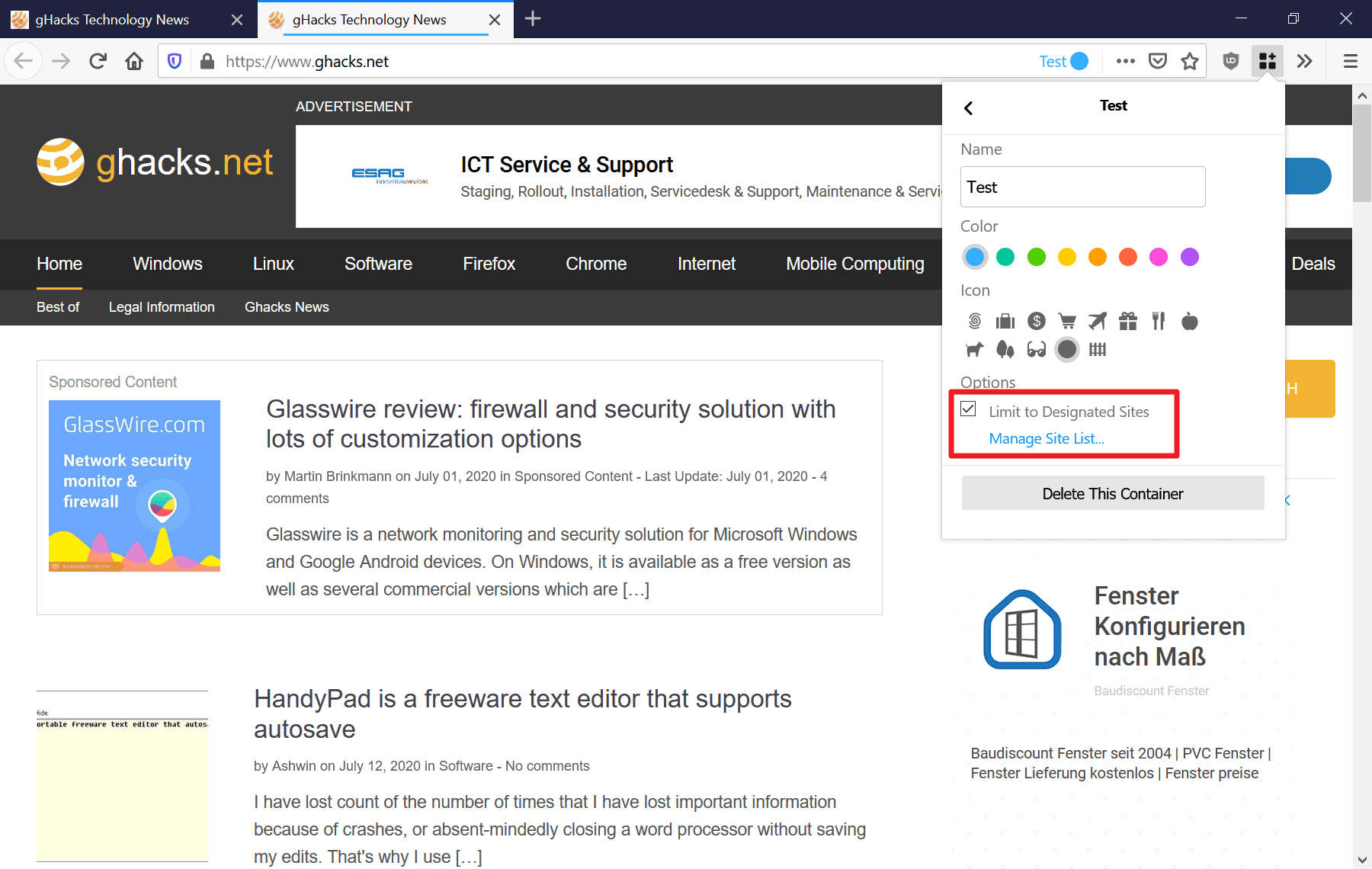 You may use the improved functionality to isolate sites similarly to how standalone extensions such as Facebook Container isolate Facebook from the rest of the browsing session.

Usage is straightforward. Load a site or sites in a particular container in Firefox, e.g. facebook.com. Select the Multi-Account Containers icon in the toolbar and activate the manage containers option in the interface that opens.

Select the container that you added the site or sites to, and check the “limit to designated sites” box on the page that opens.

Last step in the process is to open the sites again in a new tab and check the “always open in container” option to make sure that the site is opened in that container whenever it gets loaded in the browser.

You may use the site isolation feature to limit sites to specific containers, and make sure that only the selected sites do get opened in these containers.

The feature works really well for search engines. Say you assign Google Search or Bing Search to a container and make sure that only the search engine is opened in that container. Run a search and click on a result, and you will notice that the result is opened in a new tab outside the container. The same can be done for sites that post links that point to third-party resources, e.g. Reddit, Facebook, Pinterest, any search engine, or Twitter.

Now You: Do you use Firefox’s Containers feature?

Thank you for being a Ghacks reader. The post Firefox's Multi-Account Containers add-on gets Site Isolation feature appeared first on gHacks Technology News.