It has been a while since we wrote about the excellent NVSlimmer tool here on Ghacks. NVSlimmer is a handy program for owners of NVIDIA graphics cards as it gives more control over the driver installation process.

You may want to remove the Telemetry component or block it, or install only the driver to reduce the size significantly on the system and even remove some components that run by default on system start.

NVSlimmer loads the driver package that you selected and displays the available customization options. 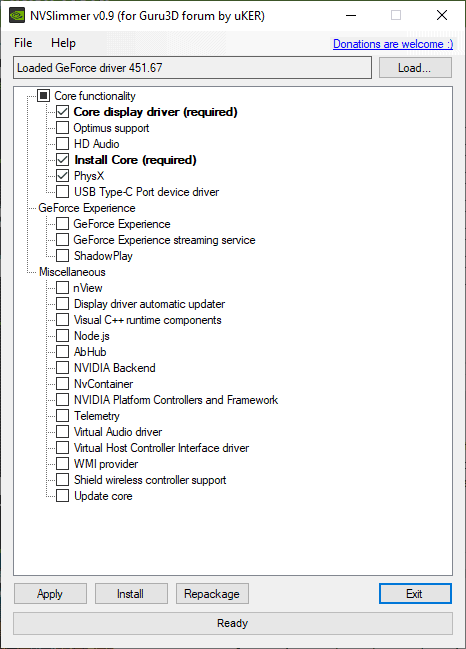 Components may differ depending on the driver that you selected. The above example separates the components into Core, GeForce Experience, and Miscellaneous.  Some components, usually core display driver and install core, are required but all other components are optional.

You may need some of these, e.g. PhysX if games or applications require those. Others may not be needed depending, e.g. Telemetry or Shield wireless controller support.

Options to install the selected components or to repackage the driver are provided. The system you run NVSlimmer on does not need to have a NVIDIA graphics card.

The developer has released several new versions of the application.  The latest version fixes DPI scaling issues on high DPI devices which previous versions of the program suffered from. The new version deletes the temporary folder that it uses automatically when you exit it; this is important as you’d end up with hundreds of Megabytes in the temp folder for a while (until cleaned).

Regular updates of the application ensure that it stays up to date in regards to driver component changes that NVIDIA may introduce.

NVSlimmer is a handy straightforward program to remove components from Nvidia driver packages before installing these on Windows systems or repackaging the driver so that it includes only the selected components.

Now You: do you install drivers regularly on your systems? (via Deskmodder)

Thank you for being a Ghacks reader. The post Nvidia driver trimmer NVSlimmer updated to version 0.9 appeared first on gHacks Technology News.

Copy++ is a simplified text snippet tool for Windows