Mozilla announced today that it plans to lay off 250 employees to restructure Mozilla Corporation significantly. The blog post was published by CEO Mitchell Baker on the official Mozilla blog.

The restructuring will strengthen the companies “ability to build and invest in products and services” according to Baker. Mozilla Corporation’s initial plan for 2020 already saw the company focusing on diversifying revenue by creating new products, some of which commercial in nature.

Baker notes that the global pandemic impacted Mozilla’s revenue significantly so that changes needed to be made to the plan for 2020 and beyond. 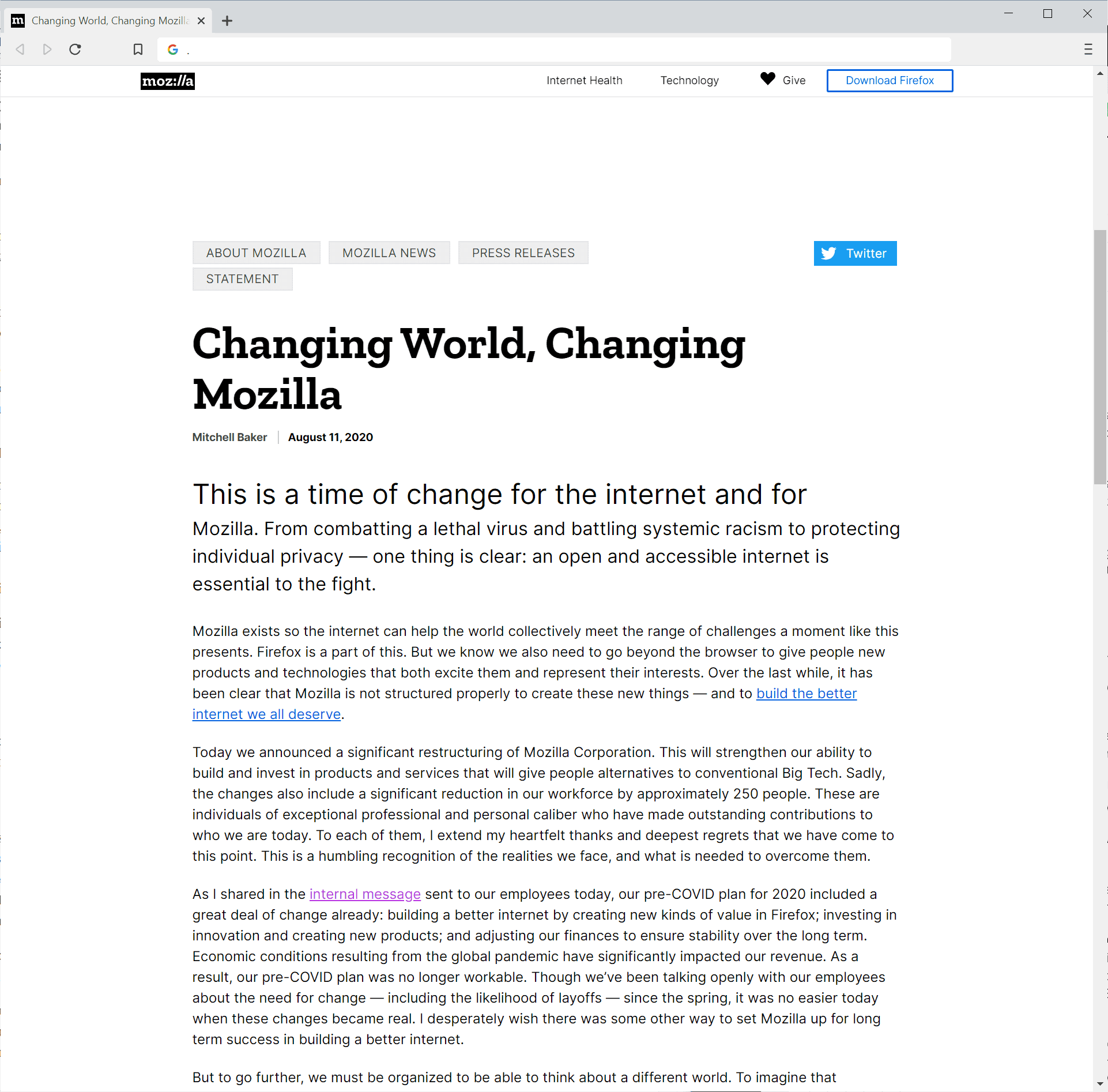 Mozilla plans to lay off 250 employees and shift work roles for another 60 employees. The company had around 1000 full-time employees in 2018 but laid off 70 employees in January 2020 already. With today’s announcement, Mozilla fired almost a third of the company’s workforce in a single year.

Mozilla will be smaller but also more quickly and nimbly according to Baker. She revealed five areas of focus for the restructured Mozilla. What may surprise Firefox users and employees is that Firefox is not mentioned once when it comes to these areas.

New focus on product. Mozilla must be a world-class, modern, multi-product internet organization. That means diverse, representative, focused on people outside of our walls, solving problems, building new products, engaging with users and doing the magic of mixing tech with our values. To start, that means products that mitigate harms or address the kinds of the problems that people face today. Over the longer run, our goal is to build new experiences that people love and want, that have better values and better characteristics inside those products.

New mindset. The internet has become the platform. We love the traits of it — the decentralization, its permissionless innovation, the open source underpinnings of it, and the standards part — we love it all. But to enable these changes, we must shift our collective mindset from a place of defending, protecting, sometimes even huddling up and trying to keep a piece of what we love to one that is proactive, curious, and engaged with people out in the world. We will become the modern organization we aim to be — combining product, technology and advocacy — when we are building new things, making changes within ourselves and seeing how the traits of the past can show up in new ways in the future.

New focus on technology. Mozilla is a technical powerhouse of the internet activist movement. And we must stay that way. We must provide leadership, test out products, and draw businesses into areas that aren’t traditional web technology. The internet is the platform now with ubiquitous web technologies built into it, but vast new areas are developing (like Wasmtime and the Bytecode Alliance vision of nanoprocesses). Our vision and abilities should play in those areas too.

New focus on community. Mozilla must continue to be part of something larger than ourselves, part of the group of people looking for a better internet. Our open source volunteers today — as well as the hundreds of thousands of people who donate to and participate in Mozilla Foundation’s advocacy work — are a precious and critical part of this. But we also need to go further and think about community in new ways. We must be increasingly open to joining others on their missions, to contribute to the better internet they’re building.

New focus on economics. Recognizing that the old model where everything was free has consequences, means we must explore a range of different business opportunities and alternate value exchanges. How can we lead towards business models that honor and protect people while creating opportunities for our business to thrive? How can we, or others who want a better internet, or those who feel like a different balance should exist between social and public benefit and private profit offer an alternative? We need to identify those people and join them. We must learn and expand different ways to support ourselves and build a business that isn’t what we see today.

Mozilla needs to focus on finding new “business opportunities and alternate value exchanges” according to the blog post.  The company launched Mozilla VPN recently in some countries, and did rename it briefly before launch to use the Mozilla brand instead of the Firefox brand.

The post provides little information about Firefox; in fact, Firefox is mentioned just once in the blog post and it is unclear if and how Firefox development is impacted by the new round of layoffs. Mozilla’s search deal with Google runs out later this year and it has not been renewed yet. The money from that deal makes up more than 90% of Mozilla’s revenue.

Now You: What is your take on this?

Thank you for being a Ghacks reader. The post Mozilla lays off 250 employees in massive company reorganization appeared first on gHacks Technology News.