While lossless tracks are a joy to listen to due to their quality, having a massive library of songs comes at a price: storage space. This becomes an issue if your phone doesn’t have a microSD card slot, or if your desktop computer’s drives are nearing the 0 Gigabyte free mark.

That’s where converting the tracks into lossy formats can help.

BatchEncoder is a user-friendly software that supports lossless and lossy audio conversion. Hate command-line based tools? Well, this program acts as an all-in-one front-end for several open source tools.

Tip: check out other batch encoders such as Shutter Encoder, Shana Encoder, or Hamster Audio Converter that we have reviewed in the past.

BatchEncoder is easy to get into, the interface has a menu bar and a couple of dropdown menus at the top, and a large pane in the middle. To begin, click on the Edit Menu or right-click anywhere on the large pane and select “Add Files”. If you want to convert an entire folder of tracks, use the add folder option.

The added tracks are displayed in the large pane at the center of the BatchEncoder interface. The File menu has some list options that can be handy. Save a list of the current list of tracks(as an XML file)for later use. Use the Load list option to pick up where you left off. Clear List deletes the queue, so you can start fresh.

The right-click menu has options to select and deselect items from the list, a basic rename function similar to Windows Explorer’s F2 function. Open File plays the selected track in your default music player, while “Open Location” brings up an Explorer window where the track is located on your drive.

The tracks pane displays the name of the song, the input format, the file size (in bytes), the output format and preset. Done adding the tracks? It’s time to pick the output format that you wanted to convert the tracks to, to do this click the dropdown menu to the left. BatchEncoder supports several audio formats including AAC, AC3, ALAC, APE, DTS, FLAC, LA, M4A, MP2, MP3, MP4, MPC, OFR, OGG, OPUS, TAK, TTA, WAV, WV, etc.

The important thing to note here is that BatchEncoder does not ship with the encoding tools (for e.g. FFMPEG, LAME, etc) by default. Instead, the program will download the required tool during the conversion process. For e.g. I was converting some FLAC files to MP3, and BatchEncoder downloaded the LAME encoder and placed it in its Tools folder. 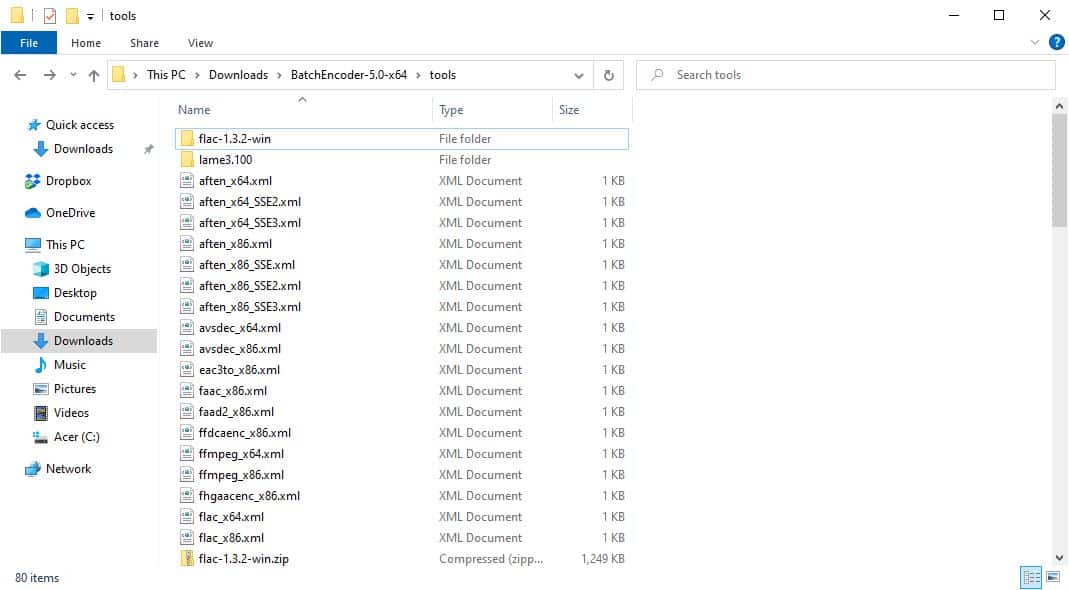 The preset menu on the right-hand side has several options for the bitrates: ABR, VBR, and CBR (average, variable and constant) that you can pick from. Choose the folder in which the converted tracks should be saved to, by using the “Set the output path” field at the bottom left-hand corner.

Experienced users can manually configure the preset, formats, tools (download URLs), from the Options menu. Don’t want to automatically download the tools? Disable the option, and use your own copies instead.

The threads option next to the output path, is for tweaking the number of processor threads to be used for the conversion. Unless you have a ton of songs to be converted simultaneously, and you have a powerful computer, the multi-thread setting is best left alone.

Hit the F9 key or the Convert button to start converting the tracks to the selected format.

Don’t panic if the Status column reads “Downloading”. As I mentioned earlier, the application gets the encoding tools required from the internet.

When the process is done,  your resized tracks will be ready to use.

Portable versions of BatchEncoder are available for 32-bit and 64-bit systems. The program is open source.

The only thing I didn’t like about BatchEncoder is that it discards the tags and metadata of tracks.

Thank you for being a Ghacks reader. The post BatchEncoder is a user-friendly audio conversion software for Windows appeared first on gHacks Technology News.

US, Britain call out Russian hacking spree, cyberattacks against Olympics

Britain and the United States condemned what they said were a litany of malicious cyberattacks orchestrated by Russian military intelligence,

Amazon sale: 15 Apple AirPods ‘lookalikes’ available under Rs 5,000 after up to 68% discount