Microsoft notes on a support page that Windows monitors NVM SSD drives exclusively, and that the monitoring is not active for SATA SSD drives or platter-based hard drives. It is the second time that Microsoft introduced a new feature in recent time that requires a NVM SSD. Support for the DirectStorage API requires a NVM device as well to speed up games.

Windows 10 displays a notification when it notices a critical condition.

“A Storage device may be at risk of failure and requires your attention. Click this message to manage drives and backup your files”. 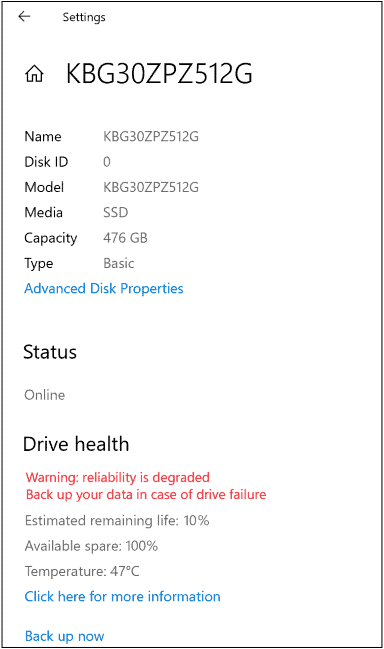 The Drive health section displays the warning, the estimated remaining life, the available spare, and the device’s temperature. You can check the values for each NVM SSD connected to the system using the management option.

The new disk monitoring feature is currently being tested and will (likely) become available in the first feature update release of 2021. It is unclear whether Microsoft plans to port the feature to previous versions of the operating system as well.

The monitoring of NVM SSD storage devices is a useful addition to Windows 10 as users may use the information to react in time and create backups of the critical drives prior to a potential failure. The limitation to NVM SSD devices reduces the usefulness significantly; systems with other drives, e.g. SSD or platter-based hard drives, can be monitored using third-party tools such as Crystal Disk Info.

Now You: do you monitor your storage devices? (via Deskmodder)

Thank you for being a Ghacks reader. The post Windows 10 gets NVM SSD drive monitoring capabilities appeared first on gHacks Technology News.

Ozioma Egemasi says Nigerian police slapped, whipped and struck him with the butt of a pistol when he refused to

Amazon sale offers today: Get up to 50% off on these headphones