Mozilla is considering adding support for multiple picture-in-picture (pip) support to the organization’s Firefox web browser. Picture-in-Picture mode enables users to launch playing videos in the browser in independent windows that can be moved around the screen.

The feature may be useful to users who like to view videos while doing something else on their systems. While that is possible using different methods as well, e.g. by using multiple monitor setups or reducing the size of the browser window, it is an elegant solution for some. 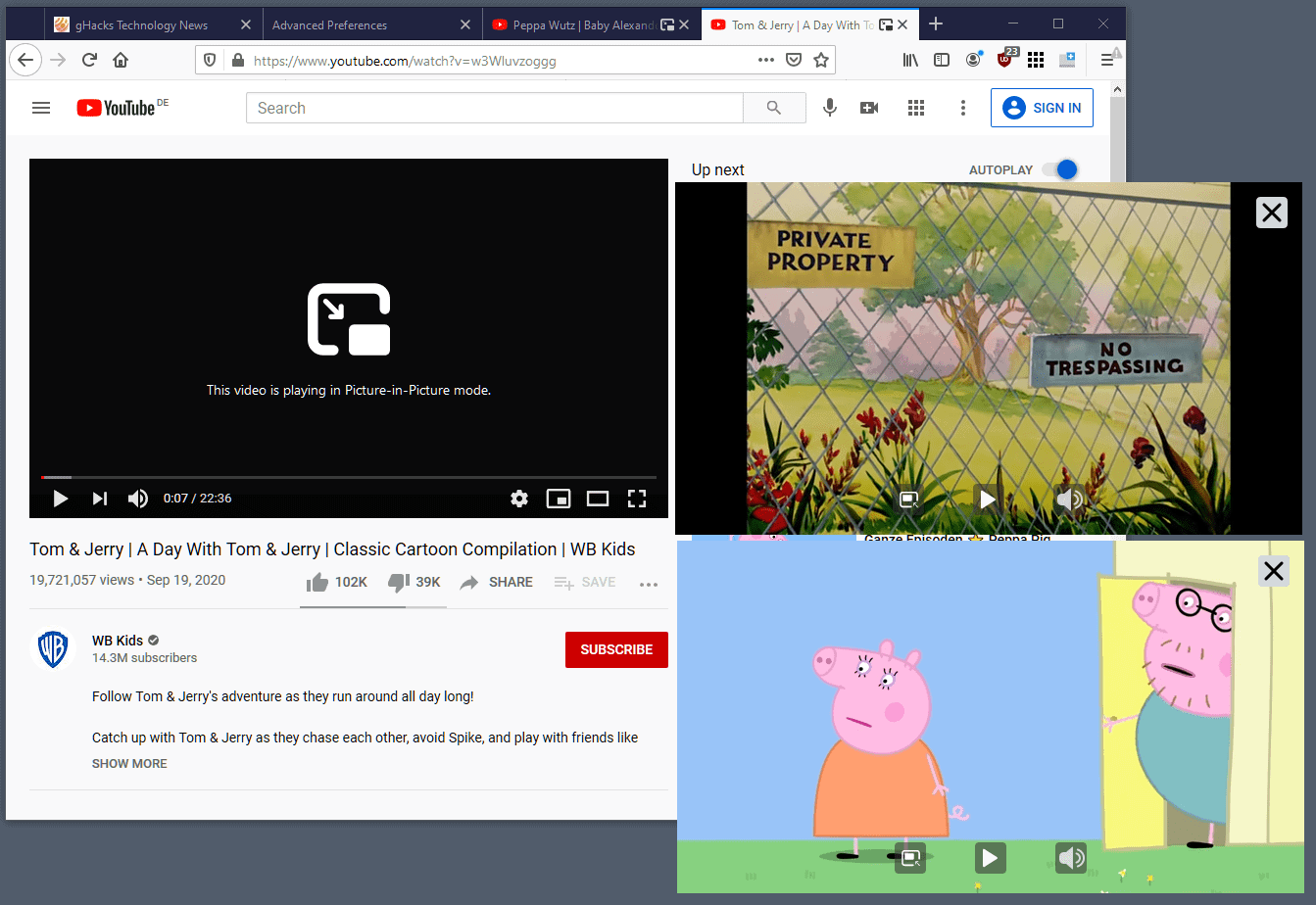 Major browsers such as Chrome or Firefox support picture-in-picture modes; Firefox users may select the PIP icon that is displayed when a video plays in the browser to launch the video in a separate window. Chrome uses a similar methodology, and both browsers limit the mode to a single video instance currently.

Mozilla is thinking about lifting the limitation to allow multiple picture-in-picture instances instead of a single one. The feature landed in Firefox Nightly already, but it is disabled by default.

Note that the feature should be considered experimental at this point, and that it is possible that it will be removed at any point in time before it is available in stable Firefox.

Here is what you need to do to enable the feature right now (or disable it should it be enabled by default in the future):

Multiple picture-in-picture mode is enabled if the preference is set to TRUE, and disabled if it is set to FALSE.

All it takes then is to go to YouTube or another supported video site in multiple tabs, and activate the PIP button in each of the tabs to launch picture-in-picture windows.

Will it be used?

Mozilla admits that it does not “fully understand the use cases” for running multiple picture-in-picture windows, but that some users seem to request the feature.

There are a handful of applications for this if you ask me. Think of watching multiple live events next to each other, e.g. multiple football games, or footage from the same even but with different camera angles.

It may not be a feature that is useful to the majority of users out there, but it is probably of use to some.

Now You: Would you use multiple picture-in-picture mode if your browser would support it? (via Techdows)

Thank you for being a Ghacks reader. The post Firefox might get support for multiple Picture-in-Picture windows appeared first on gHacks Technology News.

Britain to curb Google and Facebook with tougher competition rules

PUBG Mobile comeback in India: What may be new, expected launch date and more

​Black Friday sale: Smartphones from Apple, Samsung, Realme and Xiaomi available at up to Rs 42,000 discount