Want to share a short video of your screen? Teach somebody how to use something? All you need is a quick way to capture the content, and Electron Screen Recorder can help you with that.

The application’s interface has just 4 options, and a large blank pane. Click on the phrase “Choose a video source”. A menu will pop up with various capture modes. The first option “Entire Screen” captures the content on your current screen.

When you select the option, you will see a live preview on Electron Screen Recorder’s interface. If you’re happy with the selection, hit the start button to begin the capture. Done recording? Click the Stop button, and then on the Save as option to save the recording to a media file.

The program allows you to save the video in one of five formats: MP4, Webm, GIF, Webp and APNG. It takes a few seconds or a minute to save the content depending on the output format that you selected. You may save a recording in all five formats if you want to, but you’ll need to do it manually. To discard or restart a recording, just ignore the save as button, and click on the Start button again.

You may have noticed that the option at the bottom of the screen which read “Choose….” now displays the current source’s name (i.e. entire screen). Click on it again to change the source, the other options in the pop-up menu represent the title of each program’s window that you have open in the background. 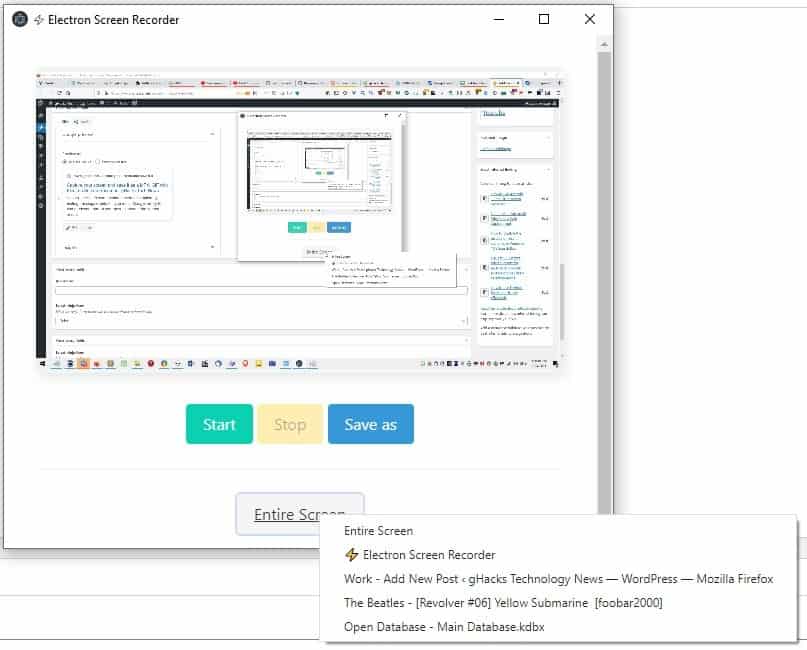 Electron Screen Recorder does not take minimized windows into account, which can be a good and bad thing. That’s good as in, the menu doesn’t become cluttered with a long list of programs. This can be an issue if you quickly want to capture something, but it isn’t in the list. The fix for it is simple, just restore the window that you want to capture and start the recording.

There is no option to choose the output resolution of the saved media, or the number of frames per second which can make the difference in the quality. Electron Screen Recorder does not have a built-in editor, so if you want to modify the content before sharing it with someone, you’ll need to rely on third-party tools.

I like the simplicity of Electron Screen Recorder, I’ll give it that but hotkeys would’ve been a good feature to have. But the main issue with it is that the program tends to be intensive on resources, it consumed somewhere between 300-400MB of RAM when capturing videos, and it spiked to higher numbers when saving the content. I have tested many Electron based applications recently, and none of them were this heavy. It depends on the source too, I noticed that the screen recorder hit nearly 1GB when I tried to record streaming videos. It dropped to less than 100 MB when the task was completed, and stayed in the 70s when idle in the background.

Electron Screen Recorder does not support audio recording, which means it is not a good option for capturing games, streaming content, etc. But, a comment from the developer on a GitHub issue hints that audio support could be added in the future, along with webcam recording. So for now, I think it is more suited for recording content that you may want to share with your friends or on social media. The program is open source, it is available for Windows, Linux, Mac, and comes in an optional portable version.

Thank you for being a Ghacks reader. The post Capture your screen and save it as a MP4, GIF with Electron Screen Recorder appeared first on gHacks Technology News.