KeePass is a powerful local password manager that can be extended in various forms, including through plugins that extend functionality and by installing third-party programs that are compatible.

Using these tools, users may use KeePass in any browser and on any device that they are using, just like commercial password managers.

To get a rundom of core features, check out our KeePass password manager review here. 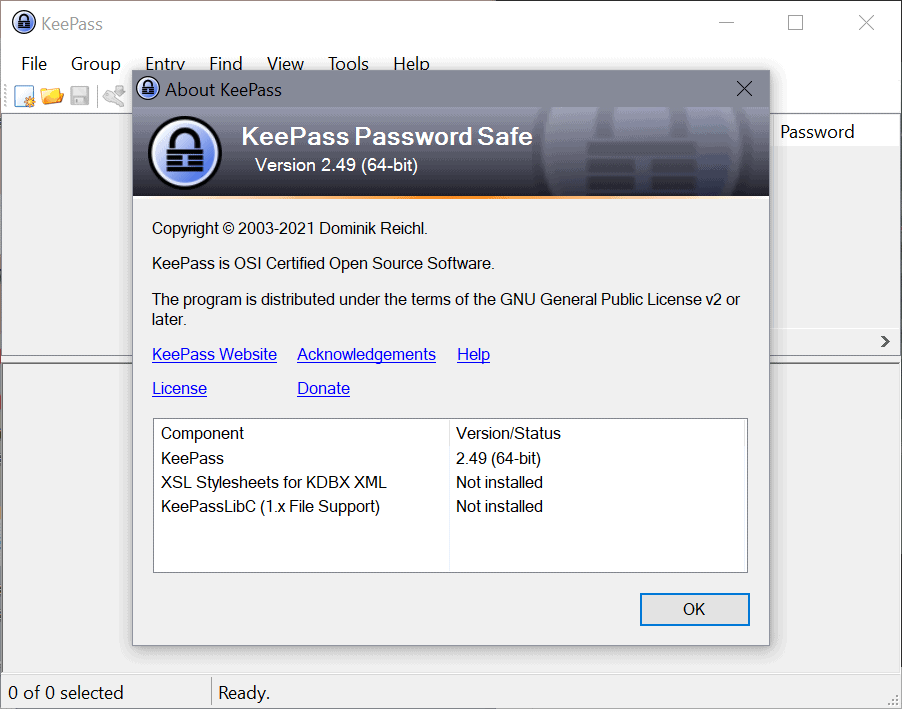 KeePass may inform users about updates, but updates need to be downloaded and installed manually. Just visit the official KeePass website and download the latest release. It is provided as an installer and as a portable copy. All settings should be retained when it is updated.

KeePass 2.49 “features user interface and integration enhancements” for the most part according to the developer. Core areas that have been improved in the new release are auto-type, accessibility and usability.

Auto-Type is an advanced feature of KeePass that allows users to define sequences of actions, e.g. keypresses, to submit these to the active window, e.g. a browser or login prompt.

A basic template submits the username, presses Tab, submits the password, and hits the Enter-key; this fills out username and password in the login prompt and presses Enter to submit the data.

Auto-Type received the following improvements in the new KeePass version:

Accessibility was improved in the new KeePass release as well. Screen readers may read dialog banners now, provided that the option “Optimize for screen reader” is turned on. Some controls have received accessibility names, which can also be read in the new release.

As far as general improvements are concerned, there are some. Tooltips are displayer for longer in most list views, support for importing data from Keeper 16.0.0 JSON files was added, and HTML exporting improvements.

KeePass gets better with every release, this version improves auto-type functionality, which is an advanced feature, as well as accessibility support.

Thank you for being a Ghacks reader. The post KeePass 2.49 Password Manager is out with auto-type, accessibility and usability improvements appeared first on gHacks Technology News.