Google Chrome 94 is available. The new version of Google Chrome fixes security issues and the first version of the browser that is released in the new 4-week release cycle. Previously, Chrome Stable was released every 6-weeks, but Google announced in March 2021 that it would switch to a faster release cycle. Enterprise customers may switch to the Extended Stable channel to get new stable updates every 8 weeks, but security updates more frequently.

The Extended Stable channel is available for Windows and Mac devices only. Enterprise users find information about the new channel and how to switch to it on this Google Chrome Enterprise Help page. Basically, what needs to be done is set the TargetChannel policy to Extended. Google recommends that customers use the roll back to target policy to go back to the previous version of Chrome when the switch to the Extended Stable channel is made. 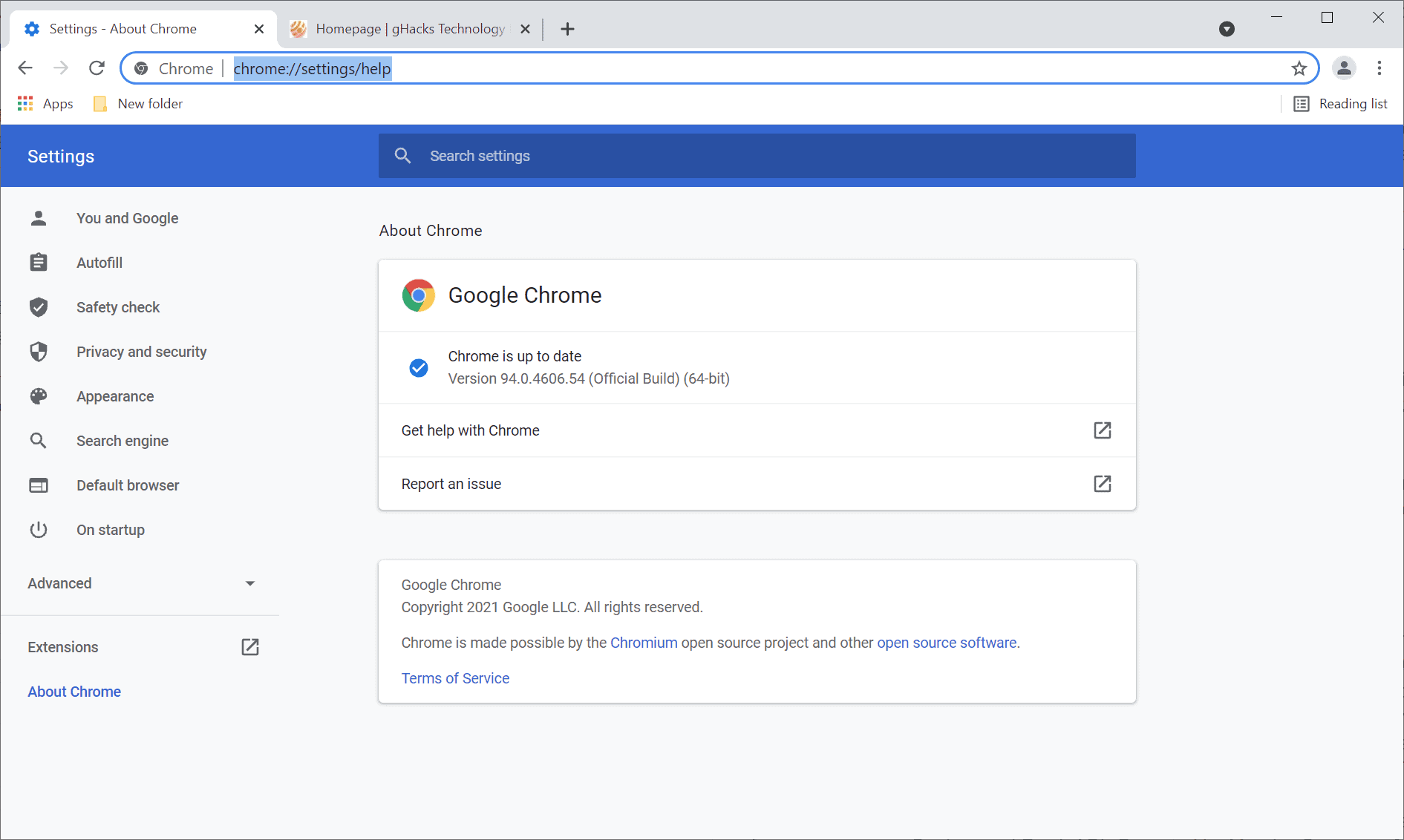 Google Chrome 94 is a security release first and foremost for the stable channel. Google reveals that 19 different security issues were fixed in the new version, several of which rated as high, the second-highest rating after critical.

Google Chrome is being rolled out over time to all devices that support automatic updates. Admins may speed up the process on desktop systems by loading chrome://settings/help. The page displays the current version of Chrome and runs a query for updates. The new update should be picked up automatically by the browser.

The aim is to protect users from cross-site request forgery (CSRF) attacks targeting routers and other devices on private networks. These attacks have affected hundreds of thousands of users, allowing attackers to redirect them to malicious servers.

Google plans to run a deprecation trial until Chrome 102 to give companies and developers enough time to make necessary changes to sites.

Chrome 94 is the first version of the browser that supports HTTPS-First mode officially. It is available in Chrome for desktop systems and for Android. Chrome tries to upgrade page loads to HTTPS and will display a warning message to users if the connection can’t be upgraded.

HTTPS-Only Mode is not enabled by default. Users find it on chrome://settings/security as “Always use secure connections”. If the feature is not yet available, set chrome://flags/#https-only-mode-setting to Enabled and restart Chrome to display it. 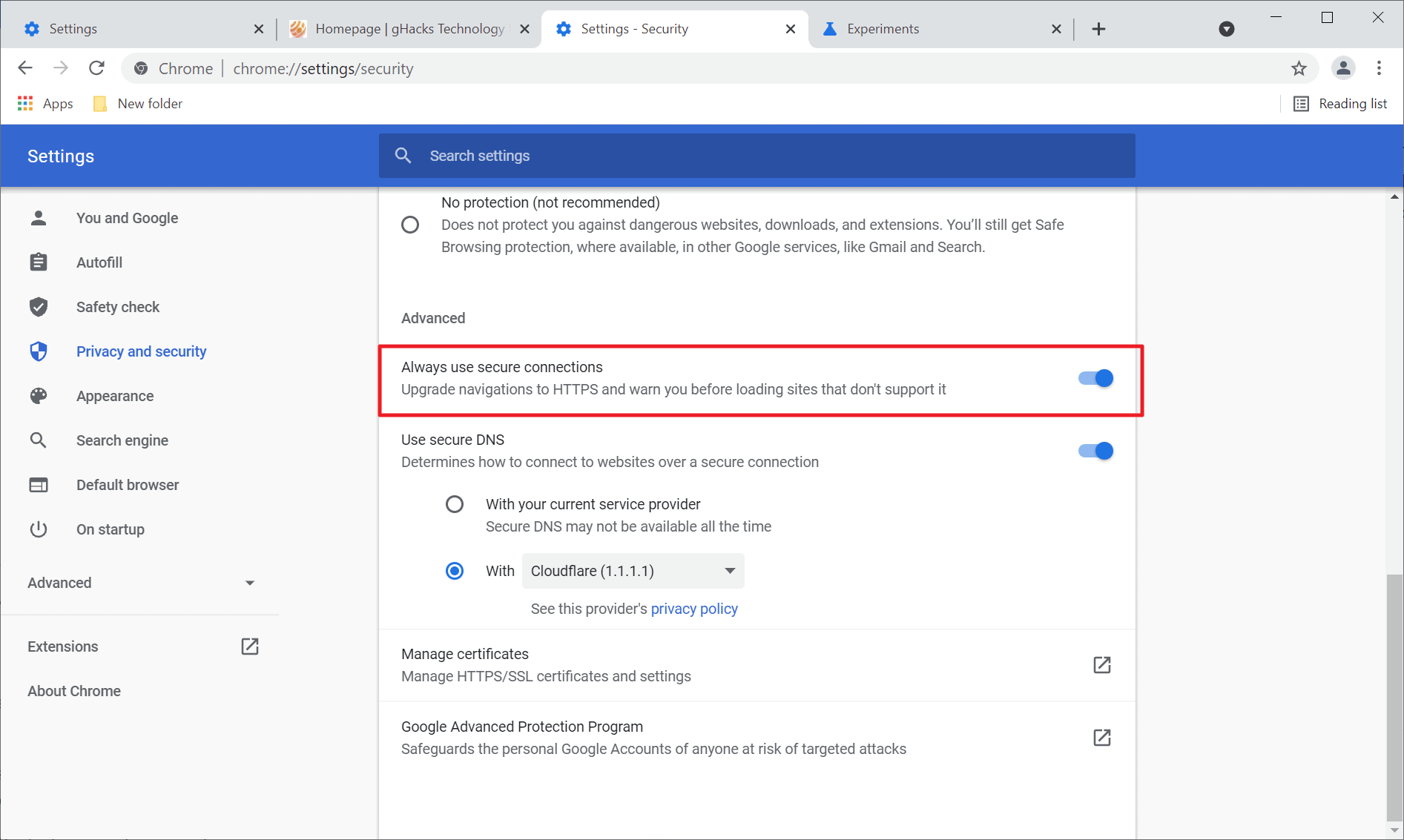 Another new feature that appears to be on the roll-out in Chrome 94 is the new desktop sharing hub feature. It adds an icon to the Chrome omnibar that displays share options in a single menu. 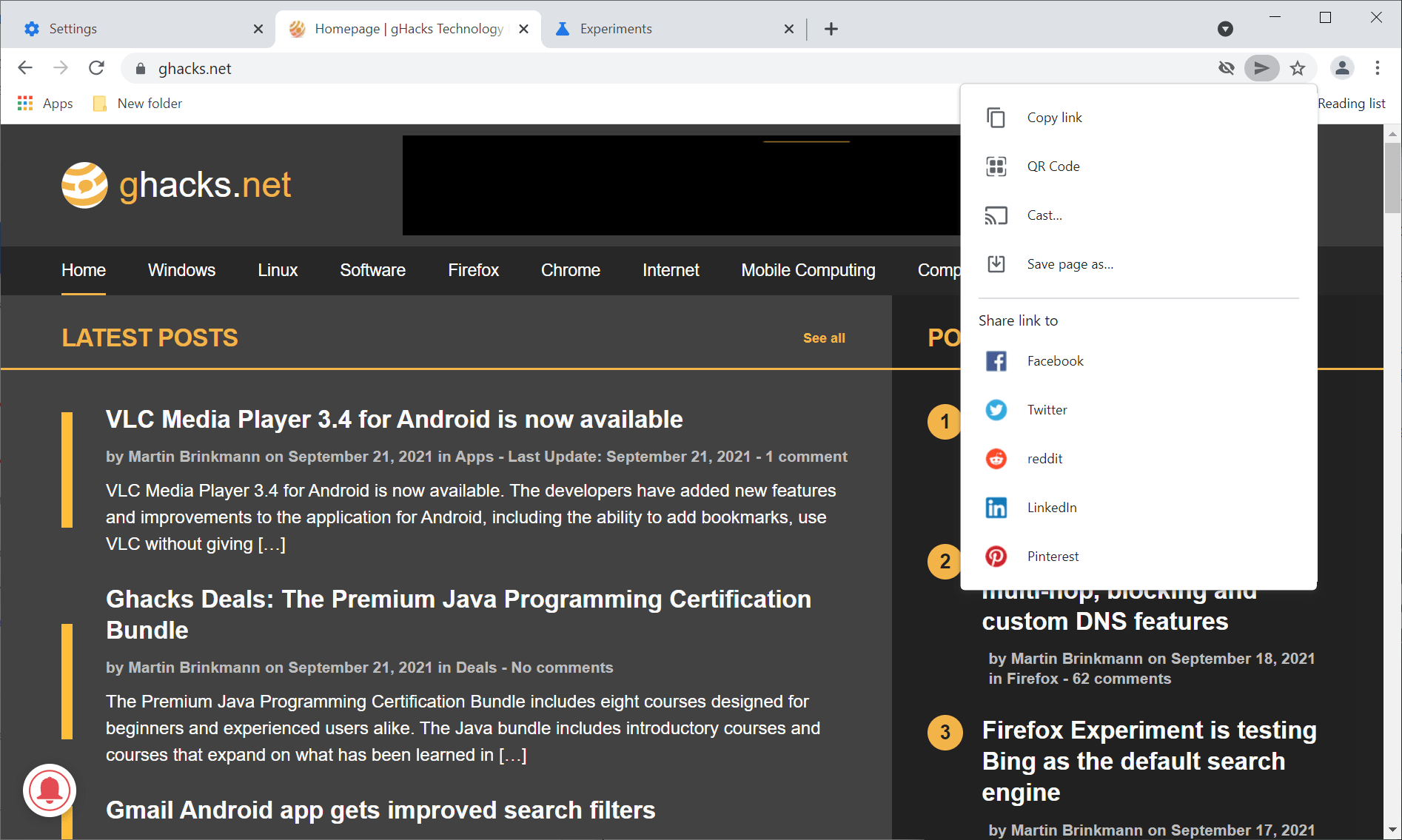 Chrome 94 introduces new features and improvements for web developers. The WebCodecs API is now available in the browser by default. It “eliminates [..] deficiencies by giving programmers a way to use media components that are already present in the browser” according to Google.

WebGPU, the successor to the WebGL and WebGL2 graphics API is available as an origin trial in Chrome 94. Google plans to include it in Chrome 99 by default.

The Developer Tools include the following improvements:

Now You: have you updated to Chrome 94? What is your impression?

Thank you for being a Ghacks reader. The post Google Chrome 94 is out with security fixes, a 4-week release cycle, and Extended Stable channel appeared first on gHacks Technology News.