It was suggested by some Ghacks visitors that I do a review of the current top 5 Distributions listed on popular ranking and information website Distrowatch; and I liked the idea, so this is my take on the current #1 spot holder: MX Linux.

MX Linux is a collaborative effort between the AntiX Linux distribution team and the MX Linux distribution team, based on Debian’s “Stable” branch. The About-Us page of the MX Linux website says, “MX Linux began in a discussion about future options among members of the MEPIS community in December 2013. Developers from antiX then joined them, bringing the ISO build system as well as the Live-USB/DVD technology. The name “MX” was chosen to combine the first letter of Mepis with the last of antiX, thus symbolizing their collaboration.”

For this installation and review, I opted for the Xfce version in order to get the full effect of what the team wants to present to users.

It should also be noted that MX Linux does not use Systemd, with the MXLinux website stating, “MX Linux uses systemd-shim, which emulates the systemd functions that are required to run the helpers without actually using the init service. This means that SvsVinit remains the default init yet MX Linux can use crucial Debian packages that have systemd dependencies such as CUPS and Network Manager. This approach also allows the user to retain the ability to choose his/her preferred init on the boot screen (GRUB).”

The MX Linux installation from a Live-USB that I created was a little surprising to me, as they used an entirely different graphical installer than anything I had seen before; and frankly, it was very dated looking and perhaps might come across as a little intimidating to users who are not overly familiar with installing Linux systems.

That’s not to say it was complicated, I found it very easy to use…But I’ve also been installing distributions like most people change socks, for nearly 20 years…However, I will say that it was very well documented with a lot of help-text all over the place, so reading along and following instructions or reading descriptions of what various menu items are, should still be fairly manageable. The installation itself had all the usual features, encryption options, automatic or self-partitioning, etc.

The installation itself once it started, was insanely fast…I went downstairs to get some water after it began, and it was done by the time I sat back down; no longer than 5 minutes, I would even say possibly 3-4 minutes. Overall, if you’ve installed an OS at least a few times in the past, especially any Linux systems, this should be manageable for you. 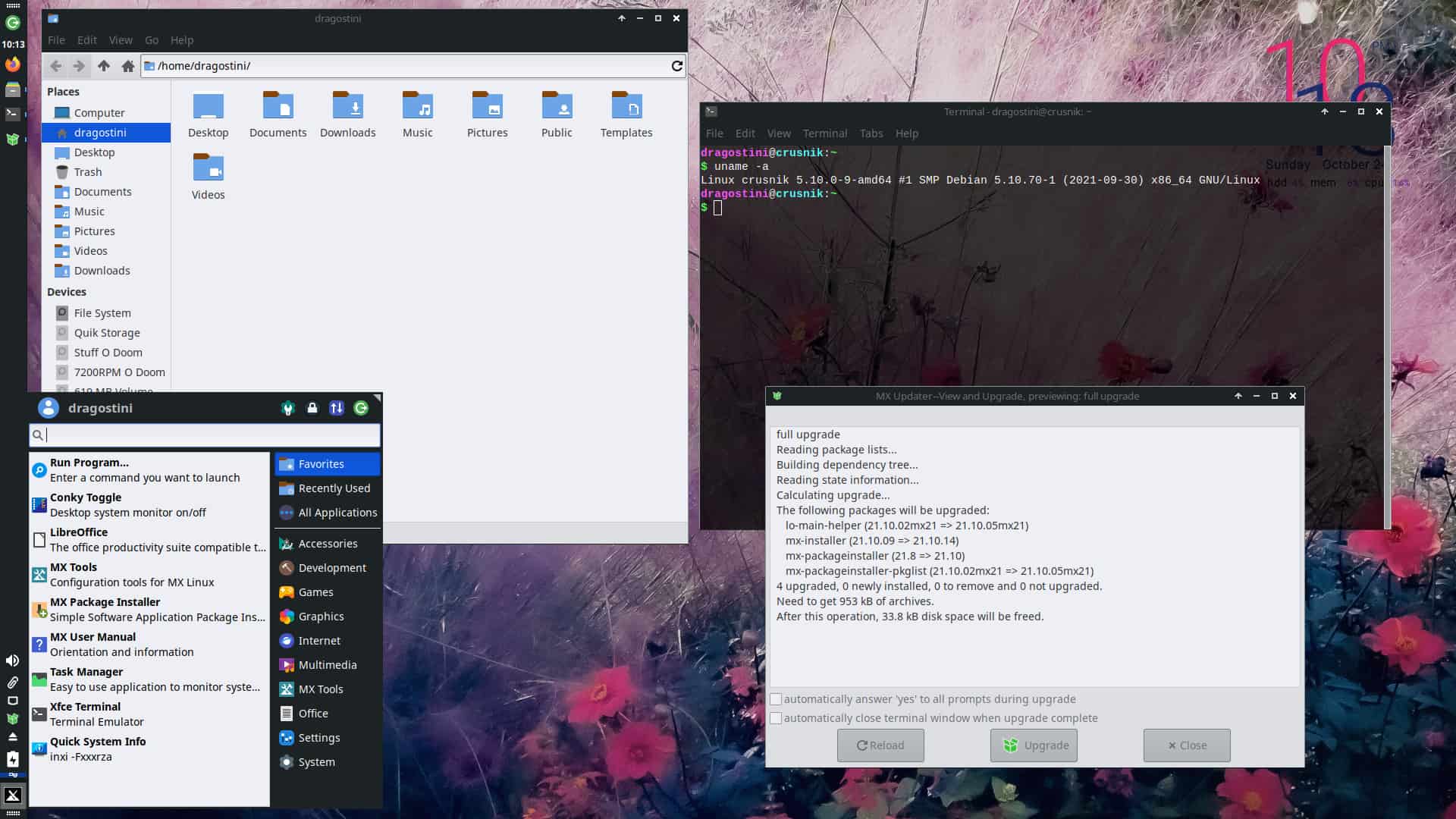 MX Linux has everything the average user will need to enjoy themselves, be productive, listen to music, watch videos, etc. From LibreOffice to Clementine music player, VLC, Thunderbird, Firefox…There is a little bit of everything, without having too much bloat where you need to start ripping apart your menu of useless items. Something that I was quite impressed with is that MX Linux comes with an absolutely massive suite of “MX” related tools, for nearly everything, such as:

There is more, suffice to say there is an MX Tool for almost anything you can think of related to managing your system, and that’s nice…It shows the level of depth and care put in by the development team to make a cohesive, manageable, organized desktop system for all users. There was even a handy application for installing NVIDIA drivers.

Xfce is a very lightweight desktop environment, and the MX Linux system is designed itself to also be quite lightweight. With LibreOffice Writer, Firefox with 3 tabs open, a file browser, and the default Conky running with my three monitors connected, I averaged 3-5% CPU used with 1.5GB of RAM being used. Everything flew open right away, and I never encountered any hiccups or stuttering.

I didn’t like the layout of the main panel being on the side, and I’m not a big fan of Xfce typically…but once I organized things a little more to my liking, I found MX Linux was a pleasure to use, responsive, fast, and had more tools than you can shake a stick at…So new users will likely not need to use the terminal for anything really, it’s all right there in nice custom-made GUI tools, however, power users may also find the simplicity of some of these tools quite handy too.

Being based on Debian will also help to ensure that MX Linux stays rock solid stable, and there should rarely be crashes or broken packages. I would recommend MX Linux to anyone who cares more about stability than bleeding edge package updates, as well as people looking for a strong distribution that does not use Systemd.

Have you tried MX Linux? What did you think of it? Let us know in the comments!