The developers of the open source email client Thunderbird have released Thunderbird 91.4.0 for all supported operating systems. 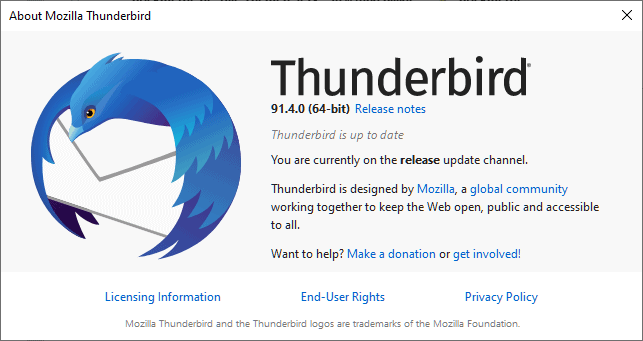 The new version of Thunderbird is a bug fix and security update. Thunderbird installations should receive the update automatically through the built-in automatic updating system. Users who don’t want to wait for that to happen can run a manual update by selecting Help > About Thunderbird from the main menu. If the main menu is not displayed, tap on the Alt-key on the keyboard to display it.

Thunderbird queries the organization’s servers to find out if a new update is available. If found, the update will be downloaded and installed.

Thunderbird 91.4.0 improves the performance of the email client in several scenarios. Installations with “a multitude of folders” will see improved startup performance after the installation of the new version.

Thunderbird installations with multiple language packs will also see improvements, as the engineers fixed an issue that caused high RAM and CPU usage resulting in a “sluggish performance”.

Here is the remaining list of changes in the new version of Thunderbird:

Now You: which email client do you use?

Thank you for being a Ghacks reader. The post Thunderbird 91.4.0 Email Client has been released appeared first on gHacks Technology News.