Intel removed the security feature SGX from processors of the 11ths generation and newer generations. Problem is, the feature is one of the requirements to play Ultra HD Blu-Ray discs on computer systems.

Intel Software Guard Extensions (SGX) “allow user-level as well as operating system code to define private regions of memory, called enclaves, whose contents are protected and unable to be either read or saved by any process outside the enclave itself, including processes running at higher privilege levels” according to Wikipedia. 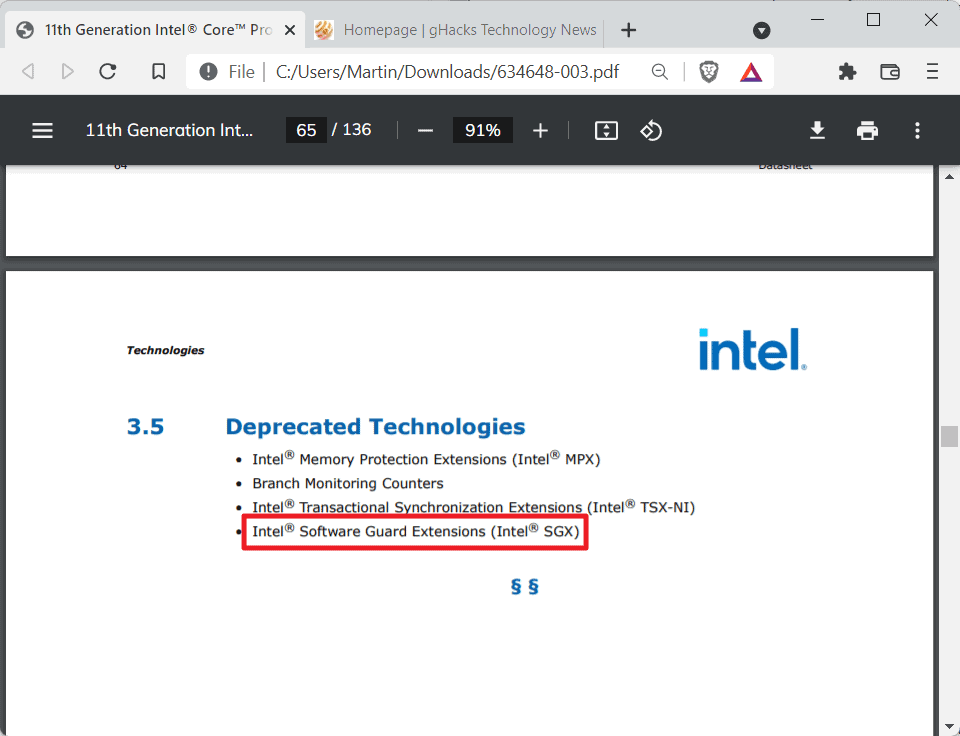 PC users who use devices with 11th generation or newer Intel processors can’t play Ultra HD Blu-Ray discs on these devices because of the missing requirement.

Cyberlink, producer of popular DVD and Blu-Ray playback software, published an FAQ entry on its website that confirms the issue.

The removal of the SGX feature, and its compatibility with the latest Windows OS and drivers, has caused a substantial challenge for CyberLink to continue supporting Ultra HD Blu-ray movie playback in our player software. So much so, that it has been determined that it is no longer feasible for CyberLink to support the Ultra HD Blu-ray playback on newer CPUs and the latest Windows platforms.

The company suggests that users stay on older Intel processors, Intel 7th to 10th generation processors to be precise, as these support the SGX feature and ensure that Ultra HD Blu-Ray discs can be played on the device. Cyberlink suggests further that users do not update their devices to the latest version of Windows, Windows 11, and do not update Intel drivers as these may remove the SGX feature in the driver.

It is probably better to back up the system and test driver updates to find out if Ultra HD Blu-Ray playback is still supported.

The use of Blu-Ray players, e.g. the newest consoles by Microsoft and Sony, provided that the editions with disc drives are bought, or other Blu-Ray players that support the 4K standard, may still be used to play the media.

Now You: are you affected by the change? (via Heise (German))

Thank you for being a Ghacks reader. The post Intel's dropping of SGX prevents Ultra HD Blu-Ray playback on PCs appeared first on gHacks Technology News.