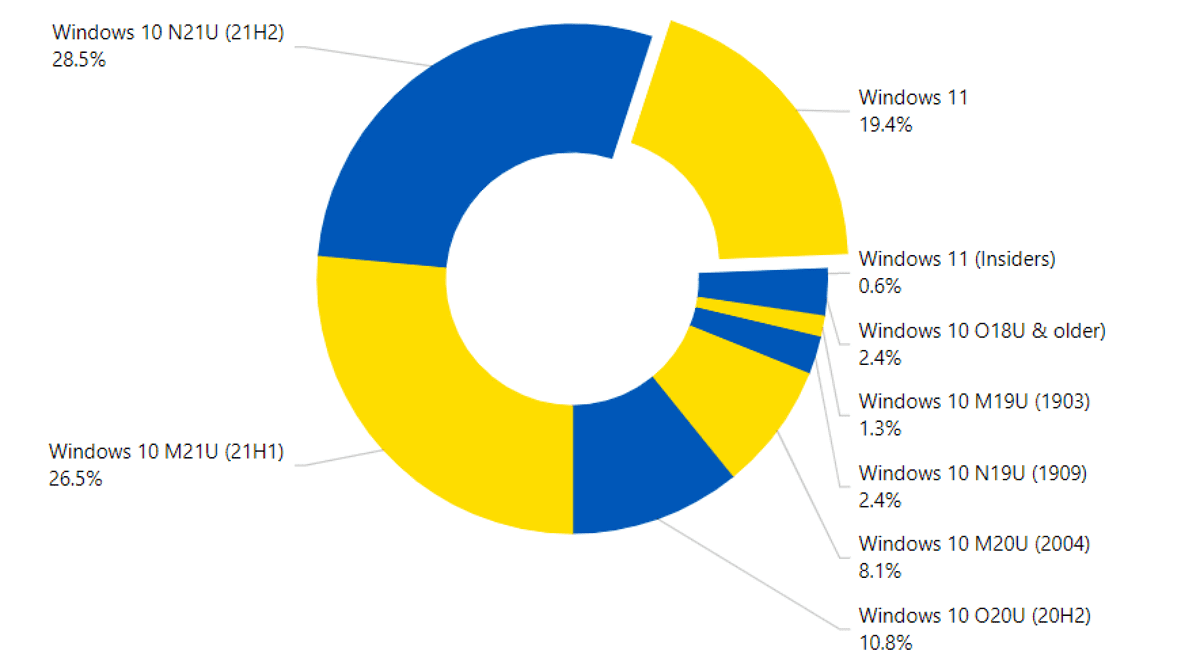 AdDuplex numbers are not exact, as it pulls these from thousands of applications for Windows 10 and 11 only. Still, the numbers provide us with trends, and the current trend does not look good for Microsoft’s Windows 11 operating system.

Windows 11, despite being offered as a free upgrade, provided that the Windows 10 license is genuine and that the PC meets all the system’s requirements, has not taken the Windows world by storm. While that was to be expected, considering that part of the devices that run Windows 10 and earlier versions are not compatible with Windows 11, it might remind veteran Windows users of other versions of Windows that did not do overly well.

Granted, a usage share of 19.4% six months after launch looks quite good on first glance. AdDuplex’s numbers are on the higher end, as it monitors only Windows 10 and Windows 11 devices. Statcounter saw Windows 11 at a usage share of 7.89% in February 2022, compared to AdDuplex’ 19.3% in the same month.

On Steam, Windows 11 is listed with a usage share of 15.59% for February 2022. One explanation for the higher number is that gamers are more inclined to run the latest versions of an operating system on their devices. Both services have not published numbers for March 2022 yet. The “real” number is unknown, but it is likely that it sits between the two extremes.

As far as Windows 11’s growth is concerned; it is possible that growth may continue in April 2022. Assuming that the number does not grow by much, some may wonder whether it was a smart move to increase the system requirements of the Windows 11 and whether that is hampering the growth, or if something else is keeping customers from upgrading to the new operating system.

The April 2022 stats and Statcounter’s and Valve’s missing March 2022 stats may shed some light on this.

Now You: will Windows 11’s usage share continue to rise, or has it plateaued already?

Thank you for being a Ghacks reader. The post AdDuplex: Windows 11's usage share rise slowed down to a crawl in March 2022 appeared first on gHacks Technology News.