When you look at browser usage statistics, you will notice that Mozilla Firefox is still doing fairly well on desktop machines. On Android, Firefox’s usage share is not all that great. Statcounter, one of the usage share tracking companies, sees Firefox at 0.5% of the mobile market, yet at 7.8% of the desktop market. 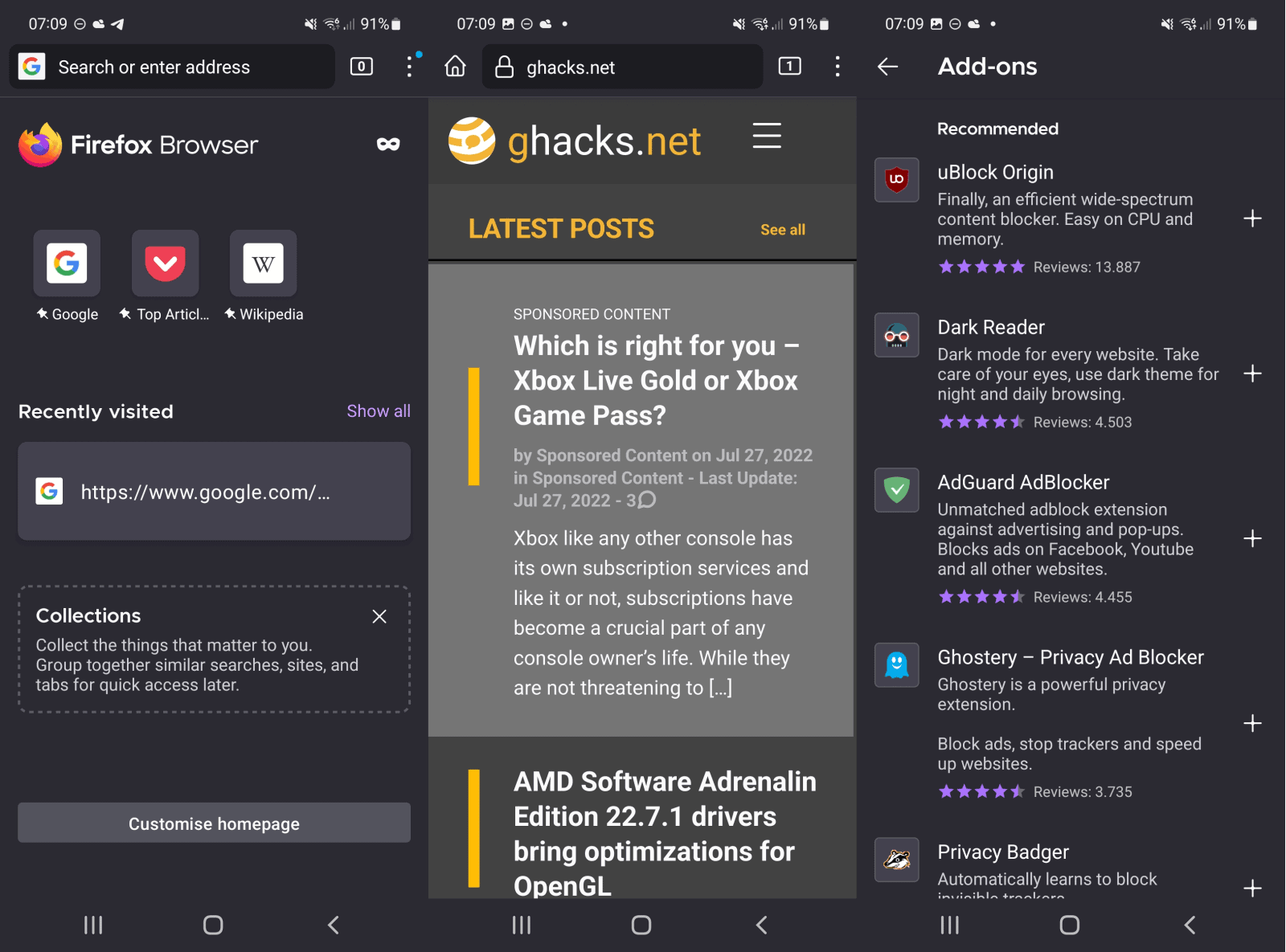 Mozilla launched a new version of Firefox for Android some time ago, hoping that the move would give the mobile browser a much needed push. While usage numbers remained more or less stable at around 0.5%, it limited one of the main distinguishing factors from Firefox for Android: add-ons.

Firefox Stable for Android supports a handful of extensions now, opposed to most extensions that were available for Firefox previously. While the list includes popular choices such as uBlock Origin, NoScript or Dark Reader, it is lacking in comparison to the previous Firefox version.

Google Chrome and Apple Safari have a clear advantage on mobile, as they ship with most mobile devices by default. Chrome is the standard browser on most Android devices, and on Apple’s mobile devices, it is the company’s Safari browser. Samsung’s mobile browser comes in third, and it too has an advantage as it is the default web browser on Samsung devices (with Chrome being installed as well).

To compete, mobile browsers need to offer features that Chrome or Safari are not offering. It will be tough for Mozilla to compete on a technological level, e.g., make Firefox feel a lot faster than Chrome on Android or beat Chrome when it comes to support for new ground-breaking technologies.

One option that Mozilla has is to make Firefox for Android the most private browser that is available on Android. If you check the most recent privacy test for Android browsers, you will notice that several other browsers are beating Firefox when it comes to privacy. (Note: the site is run by a Brave employee)

Only a fraction of Internet users cares about these privacy tests, and whether a browser has fingerprinting resistances included or not.

Here is my proposal: come to an agreement with the developer of uBlock Origin to get the extension integrated natively in Firefox. Turn it on by default using sensible settings that provide a good level of protection and web compatibility.

Firefox would feel blazing fast on mobile thanks to the integrated content blocker, and battery usage would also improve as a consequence. Mozilla could implement better options to turn off the content blocker on select sites, to highlight that this would help sites that rely on advertising survive.

Downside to this would be that Mozilla would lose out on much of the revenue that is coming in from Android. Mozilla relies on a Google Search partnership for much of its revenue. It is unclear how much the Android browser is contributing to that. Mozilla could look for a different search company, one that is privacy-friendly when it comes to searches.

Alternatively, Mozilla could try and generate revenue through donations.

Now You: what do you think of the proposal? How would you try to increase the market share of Firefox for Android?

Thank you for being a Ghacks reader. The post Opinion: Firefox for Android needs best-in-class ad-blocking and privacy protections to compete appeared first on gHacks Technology News.

Sony in terms of console sales and installed base, having sold more than twice as many Xboxes in the last