Windows 11 Insider Preview Build 25169 has been released to the Dev Channel. It adds a new way to use Windows Spotlight, a Multi-App Kiosk Mode, and fixes many bugs. 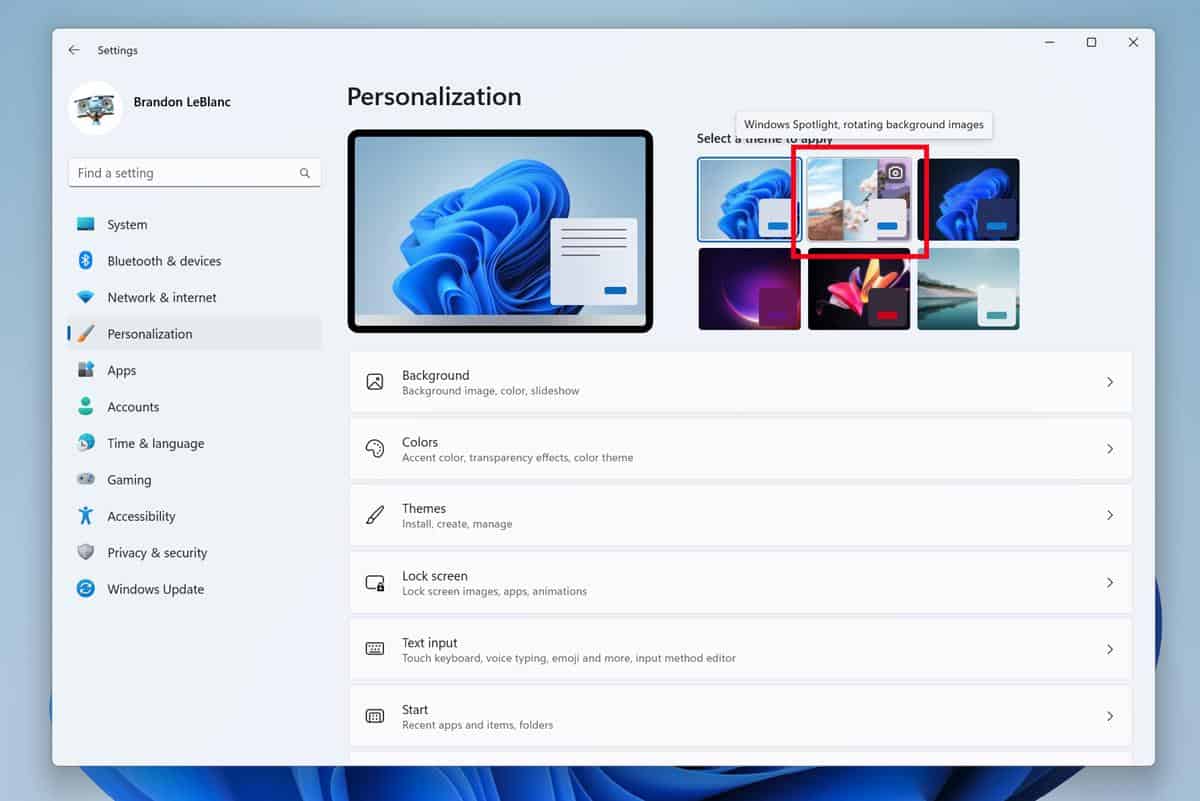 The update adds a new theme called the Windows Spotlight theme. You can enable it from the Settings > Personalization > Themes page. It allows users to customize the theme while retaining Spotlight’s rotating images.

I couldn’t find the new theme, so it is yet another feature that is being A/B tested. If you set a theme (and customize it), then switch to Personalization > Backgrounds, and select Spotlight, you’re practically getting the same experience. The only thing that’s missing is the ability to save the theme.

Microsoft has taken further steps to make the migration from the Control Panel to the Settings app easier, by adding support for uninstallation of apps that have interdependencies, such as games from Steam. The app can now repair and modify Win32 apps.

IT administrators can use the new Multi-app kiosk mode to allow specific apps to run on a computer while blocking other functionalities like access to the Settings, disabling pop-ups listing only the allowed apps in the Start Menu. This lockdown feature can be useful for devices that have multiple users.

Explorer.exe was crashing and preventing the Taskbar from loading when launching Microsoft Teams meetings, this issue has been fixed. A couple of Explorer.exe crash issues related to the Taskbar Overflow have also been patched out. The Scrollbar will not render unexpectedly wide in apps like File Explorer, when using  high DPI scaling

The “More” button should no longer vanish from the Start’s Recommended section. The touch keyboard layout’s responsiveness for key repeat rate has been improved, it now has a rate of 20 keys per second. Opening and copying files from network locations should not lead to a bug check. An error code 0x80004005 that occurred due to the network troubleshooter has been fixed.

Microsoft has fixed a bug that was causing Audio to desync when using the Xbox Game Bar to record game play. The Windows Security app will not display warnings on the taskbar when there are no issues in the dashboard. The app had a problem which was causing it to say that standard hardware security wasn’t supported on devices which had compatible hardware, this bug has been patched. Microsoft says that the issue may recur after the next Windows Security update, but will be fixed in a future update.

The known issues in Windows 11 Insider Preview Build 25169 are identical to those in the previous release (Easy Anti-Cheat, arrow in File Explorer tabs,Widgets tempertature units, etc). Please refer to the release notes for more details about the update.

Microsoft has also released Windows 11 Insider Preview Build 22621.440 and 22622.440 to the Beta Channel. New features in these builds include Dynamic Widgets content on the taskbar, an updated Open With dialog box and more

Thank you for being a Ghacks reader. The post Windows 11 Insider Preview Build 25169 released to the Dev Channel appeared first on gHacks Technology News.