Every one knows how to create new folders regardless of (desktop operating system) that is used. In Windows, users simply right-click in Explorer and select the New > Folder option; those who prefer keyboard shortcuts may do the same with the shortcut Ctrl-Shift-N.

How do you create multiple folders at once? While you can create folders one by one, or use copy and paste operations, it becomes less and less practicable with a rising number of folders that you need to create.

New Folder Wizard was designed to create as many folders as needed in as short a period of time as possible. 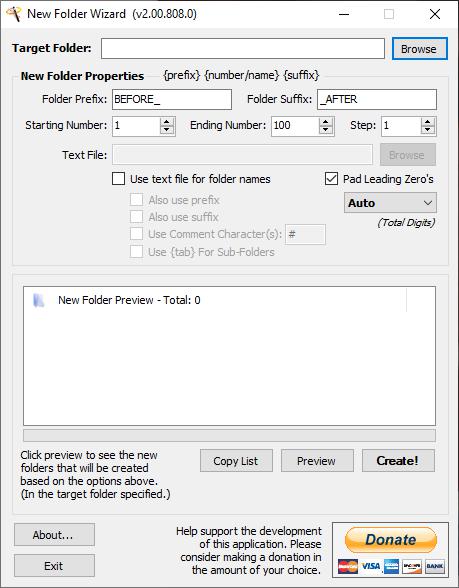 New Folder Wizard is a portable program for 32-bit and 64-bit versions of Microsoft Windows. All you need to do is run it after you have downloaded it. The application displays all available options and settings on a single page.

Use the target folder bar to locate the directory in which you want the other folders to be created. Fill out the folder prefix and suffix fields to select fixed parts of the name for every folder that is created.

The program doesn’t tell you this, but you can add separators to make the folder names tidier. To include spaces hit the space bar when the cursor is in the “Folder prefix or suffix” fields. This also works with symbols hyphens, underscore and other characters.

The Starting Number/Ending Number options are part of the renaming tool. You can set it from as low as 0, and up to 20000. The numbers determine how many folders are created by the program, e.g. if you pick 1 as the starting number, 20000 as the ending number and 1 as the step, you’d end up with 20k folders. 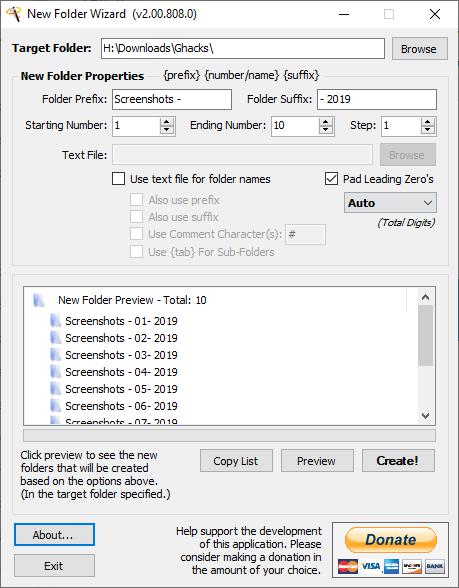 The Pad Leading Zero’s option can be optionally disabled. It is set to auto by default and adds a zero to the name. That’s why we saw the zero in the second part of the name (Screenshots – 01- 2019) else it would have been Screenshots – 1- 2019.

New Folder Wizard has a preview panel which displays the list of folders which will be created with the selected options. You can use this before finalizing the folders to make sure everything is set up correctly.

The generation of the preview isn’t automatic, so to use this hit the Preview button to generate the list. When you’re ready, click on the Create! button and New Folder Wizard will create the folders as per your setting. The Copy List option is handy in case you want to save the names of the folders in a text document to keep a record of your folders or something else.

The option to browse for a Text File is grayed out until you enable the “Use a Text File for folder names” setting; doing so disables all the other options. The program will create the folders based on what the document contains. For e.g. if the text file contains a naming pattern like the following, the application will use it directly. 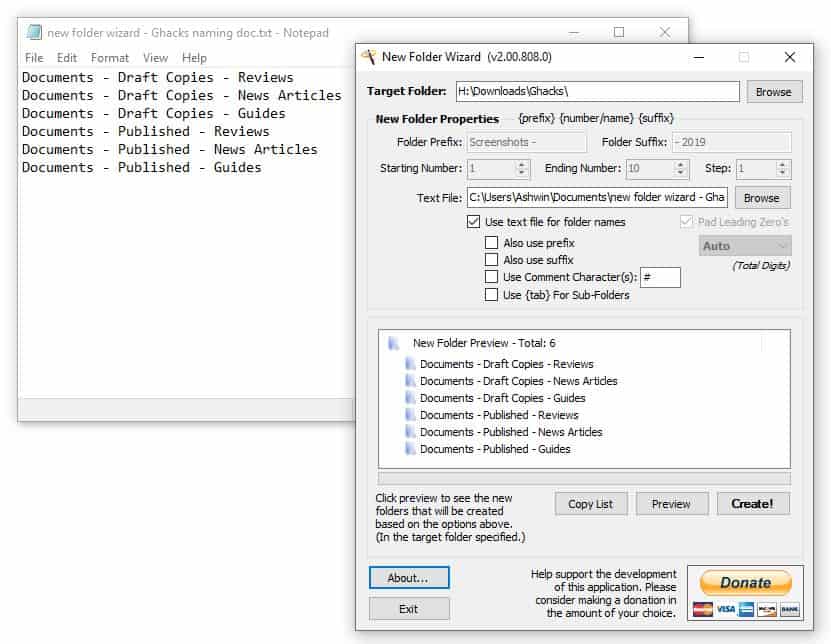 I found this to be easier for complex naming patterns, but tedious when creating many folders due to the manual effort involved.

New Folder Wizard is freeware and portable, it is just an executable file with a size of 165KB to download.

The program has a handful of applications: from creating a medium number of directories quickly, e.g. a month-year structure, to the creation of lots of folders for testing purposes. The program may be very useful for people who organize their drives by content, and as a fellow data hoarder, I think it’s pretty interesting.

Thank you for being a Ghacks reader. The post Create dozens or even thousands of folders and name them instantly with New Folder Wizard appeared first on gHacks Technology News.

The Center for Digital Democracy, Campaign for a Commercial-Free Childhood and others in May asked the FTC look into their